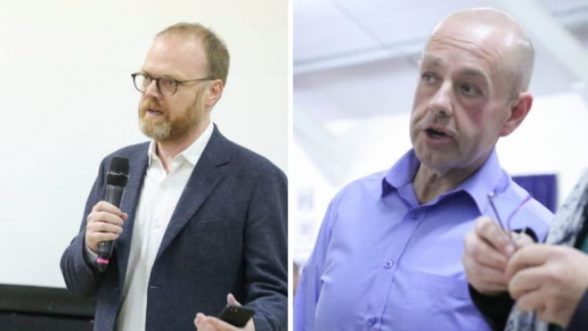 INVESTIGATIVE  journalists Trevor Birney and Barry McCaffrey, who were arrested in connection with the alleged theft of confidential material used in a documentary on the Loughinisland massacre, have been freed.

The men were released on bail, their solicitors said outside a Belfast city centre police station on Friday night.

The award-winning reporters were detained for questioning over material used in their film on the 1994 shootings in the Co Down village produced by Fine Point Films Ltd.

They walked out of Musgrave Street police station in Belfast just before 9 pm.

Six men were murdered when loyalists opened fire on a crowd of football fans gathered around a TV in a village pub watching the Republic of Ireland play in the World Cup.

Last year’s No Stone Unturned film examined the persistent claims of state collusion in the murders and broke new ground by publicly naming what it said were suspect.

Police said the confidential material under investigation had been in the possession of the Police Ombudsman for Northern Ireland (PONI).

A police spokesman has claimed the theft of the documents “potentially puts lives at risk”.

PONI officers reported the theft to the Police Service of Northern Ireland. The PSNI then asked Durham Police to conduct an independent investigation into the theft.

Mr Birney, 51, and Mr McCaffrey, 48, were arrested by officers from the Durham force on Friday morning.

Outside the police station, a tearful Mr McCaffrey said: “There are families here (who) lost loved ones who didn’t get justice today. 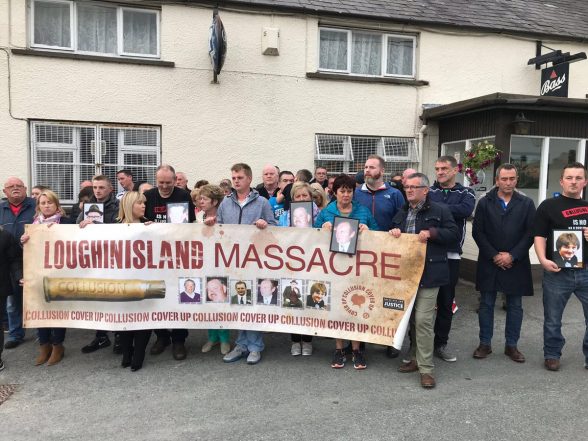 “This man (Mr Birney) was taken away from his wife and his children this morning, my neighbours had to see me getting taken away. It’s not fair, it’s not fair.

“And it’s an attack on the press, everybody should realise. It’s us today, tomorrow it could be you.”

Mr Birney said it had been a “very difficult day”.

“What I have witnessed today is nothing more than a very sinister attack on the freedom of the press,” he said.

“Throughout those interviews not one scintilla of evidence was put to Mr Birney,” he said.

Mr Murphy added: “It was very apparent at all times that the PSNI’s predominant interest was their ability to continue to recruit informers rather than to investigate crime.

“I have spoken with the families of the Loughinisland atrocity today and they are bitterly disappointed, heartbroken in fact that the only investigative action arising from the film No Stone Unturned was the arrest of the two people who investigated the matter and sought to expose the truth, rather than to investigate the six murders that occurred and the protection that was afforded to the suspects by police.”

Mr Murphy said a High Court challenge by the film company behind the documentary had injuncted the police from examining the evidence seized until the matter was aired at a full court hearing.

The case will be reviewed next Friday by the Lord Chief Justice Sir Declan Morgan.