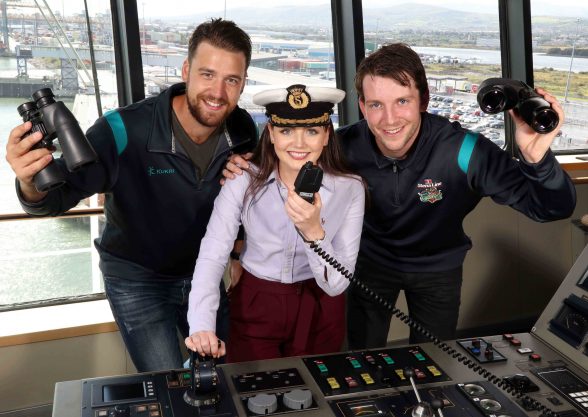 NORTHERN Ireland’s leading ferry company, Stena Line, has announced that it has renewed its sponsorship of the Belfast Giants for the eighth year running and to celebrate, is offering fans the chance to meet, greet and sail with their heroes on a Stena Line Belfast Giants Cruise, from £22 per adult on Saturday, September 1.

The cruise will give ice hockey fans the opportunity to meet their favourite players as well as fellow hockey enthusiasts.

Stena Line Belfast Giants fans can have pictures taken with the hockey champions and get their autographs, as well as joining in with a range of fun activities onboard.

To ensure fans make the most of the non-landing cruise, Stena Line will host some exciting events including face painting for the younger fans and a disco where everyone can enjoy a boogie to their favourite songs.

There will also be a challenging quiz that will really put fans’ knowledge to the test!

Each passenger will also receive a £5 shopping voucher for Stena Line’s onboard shop*.

“We are thrilled to announce that as leading ferry company, we continue to be the title sponsor for ice hockey champions, the Belfast Giants for the eighth consecutive year running.

“We look forward to watching the Stena Line Belfast Giants build on their previous success and know they are aiming for the top in the 2018/2019 season!

“We think the Stena Line Belfast Giants Cruise is a great way for fans to really get to know the players and if you haven’t yet been to a Belfast Giants game I would definitely suggest that you round up your family or friends and come along this season!

“The atmosphere is like none other and it really is a sport that everyone can enjoy,” Orla concluded.

“We are delighted to renew our sponsorship with Stena Line and look forward to another successful season.

“Last year we welcomed over 150,000 fans to the arena and the popularity of the sport here in Northern Ireland just seems to keep growing very year.

“Our fans are fantastic and anyone who has been to a match will know that their energy and enthusiasm for the game is unrivalled.

“I’m excited to see what this season will bring as I am confident that we can go all the way to the top of the league this year,” added Adam.

Prices for the cruise are £16 per child, £22 per adult and infants travel free of charge.

For more information on the Stena Line Belfast Giants go to www.belfastgiants.com

*£5 money off shopping voucher can be used when you spend £25 in our onboard shop. Only one voucher per transaction. Excludes alcohol and promotional items.