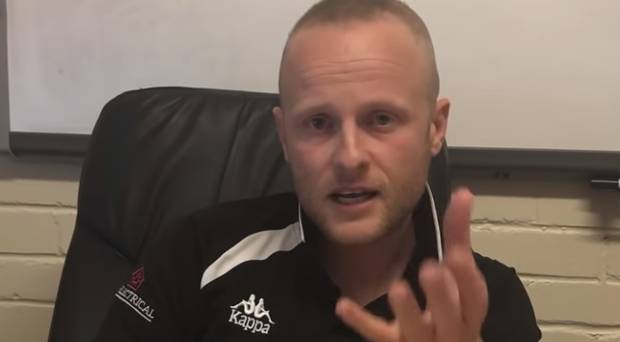 Loyalist Jamie Bryson claimed his arrest by police was “absurd”

LEADING loyalist Jamie Bryson was arrested yesterday as part of a PSNI prob into the alleged illegal supply of doormen linked to the East Belfast UVF.

He was taken to Musgrave Police Station for questioning, and later released without charge.

Officers from the Paramilitary Crime Task Force supported by the Security Industry Authority (SIA) had conducted a search and arrest operation at two residential addresses in Bangor and Donaghadee, as well as an office premises in Newtownards.

He said the PSNI’s mention of the UVF was used to “blacken his name”.

In a video on YouTube last night, Mr Bryson hit out at what he called his “absurd” arrest.

He said in the video he had been arrested by the PSNI “in what has to be one of the most absurd, ridiculous … policing operations anybody is likely to come across”.

Mr Bryson said the PSNI spent “six or seven hours with me locked in a cell, doing absolutely nothing”.

The loyalist claimed that in the course of his interview the police put no evidence to him.

He said: “No allegations were put to me — absolutely nothing”.

He promised to upload the official recording of his police interview to the internet today to back up his account.

Mr Bryson said he was charged with no offence, and had therefore refused to accept bail, claiming also that the police had attempted to gag him from speaking about the investigation.

In a statement issued earlier, Detective Superintendent Bobby Singleton, head of the Paramilitary Crime Task Force, said: “Today’s joint search and arrest operation with the SIA ties into an ongoing investigation into criminality linked to the east Belfast UVF.

“The PSNI works closely with the SIA on a range of initiatives to ensure the public are kept safe by assuring that security staff are correctly licensed. This is important work as the public are exposed to door staff when, at times, they are at their most vulnerable through the consumption of alcohol or drugs.”

He said officers would be “relentless” in pushing for a culture of lawfulness here.

“There is no hiding place for paramilitaries or criminality linked to them as they destroy people’s lives and harm the very communities they claim to be defenders of,” he said.

“We know that these paramilitary groups continue to hold a significant amount of fear, intimidation and control over communities and we are absolutely determined to take that control away from them and allow communities to prosper and live in safety.

“We work with people living in these areas to tackle the issues that affect their lives, however, we need help from the community in identifying where criminality is taking place and who is involved in it.”