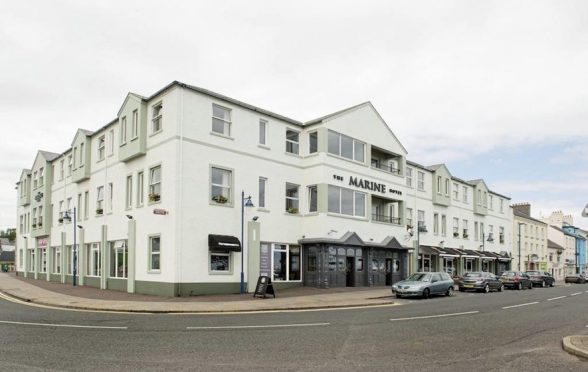 NESTLED in the heart of the iconic Causeway Coast sits Ballycastle. Famous for the Lammas Fair, the present-day traditional fair provides street entertainment and market stalls. With 2 days of horse trading, bartering, busking, amusements and street entertainment competitions this fair has been a must see for many years.

The fair traditionally attracts thousands of people from around the world and features more than 400 stalls selling craft, bric-a-brac, local crafts and farm produce to mention a few!

Locals look forward to the fair and enjoy meeting up with old friends that they haven’t seen from the previous year! A good chat and a bit of craic is sure to be had!

Also, a departure point for the wonderful Rathlin Island, Ballycastle is a must do destination. So, once you have decided to visit Ballycastle and the surrounding area there is only one place to stay and that is the recently refurbished Marine Hotel Ballycastle.

Located right on the coast offering stunning views of the north coast the Marine Hotel is without doubt the area’s finest hotel occupying an unrivalled seafront position in County Antrim on the Causeway Coastal route.

The Marine offers uncompromising service and comfort to accommodate even the most discerning guests.

Apart from providing wonderful food and service to its guests it’s the location of the hotel that really sets it apart from the competition.

The Causeway Coast and Glens of Antrim boasts some of the finest links and parkland courses on the island of Ireland. The Marine Hotel is ideally located for guests to enjoy the best of the province’s iconic courses, from Ballycastle Golf Club right outside their door, to Royal Portrush, Portstewart and Castlerock a short drive along a stunning coastline. The Marine Hotel offer guests exclusive golf rates and packages so be sure to contact their sales team to discuss your next golfing trip.

The HBO hit series Game of Thrones® is filmed in Northern Ireland. Filming throughout the show has taken place in many locations on the Causeway Coast including Murlough Bay, The Dark Hedges, Fairhead Ballycastle, Cushendun Caves and Ballintoy Harbour. And as luck would have it Ballycastle is situated right in the heart of Westeros.  So, whilst enjoying an overnight stay at the Marine Hotel Ballycastle in a Sea view bedroom you could wake up to a view of the Cliffs of Dragonstone, the home of the dragons!

From the Hotel you could take a short drive to the famous Dark Hedges, close to the village of Armoy, visitors will be amazed by one of the most iconic Game of Thrones® filming locations of them all, The Dark Hedges. This beautiful tree-lined avenue and famous Northern Ireland landmark, was planted by the Stuart family in the eighteenth century, and was used as a filming location for the Kingsroad in Season 2 Episode 1, when Arya Stark, dressed as a boy, escaped King’s Landing in the back of a cart.

Close by is Ballintoy Harbour better known to fans of Game of Thrones® as Lordsport Harbour, Pyke and the Iron Islands where Theon is baptised into the religion of the drowned God, thus reaffirming his loyalty to his family in Season 2 Episode 2.

Ballintoy Harbour was also used as a filming location in Season 4 Episode 2 when Melisandre presides over the burning of the Bannermen, and is referred to locally as the ‘raised beach’.

The harbour, and the nearby village of Ballintoy, are a picture-perfect stop-off point along the Causeway Coastal Route.  Also close by are The Giants Causeway and Carrick a Rede rope bridge near Ballintoy in County Antrim, Northern Ireland. The bridge links the mainland to the tiny island of Carrickarede. It spans 20 metres and is 30 metres above the rocks below. If you have got the nerve it’s a wonderful experience.  Also, fairly close to the hotel is the World Heritage Site of the Giants Causeway, known the world over, it’s a must-see attraction that features the uniquely shaped basalt hexagonal columns.

The Marine Hotel Ballycastle know how important it is to have your pets join you on holidays and yes they have thought of this too, so when exploring the Ballycastle area you too can bring your favourite pooch. Your four-legged friend can join you in the Marine’s Costa Coffee & Library area for dining whether that be for lunch or a candlelit dinner and on top of that the hotel  are able to offer designated dog friendly bedrooms, luxury service for you and your dog.
A dog charge will be applied at time of booking of £15.00 per dog per night