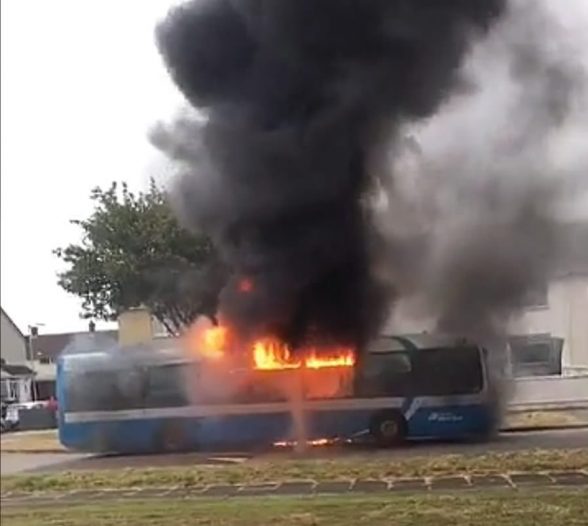 A SENIOR PSNI officer has condemned sporadic disorder which occurred in areas of Belfast, Newtownards and Derry last night.

Fire crews were attacked and vehicles hijacked and torched during the trouble on the 11th of July.

Part of the Lower Newtownards Road was closed in the early hours of Thursday while police examined a hijacked car but it has now reopened.

A number of cars were set on fire in Dundonald while a bus was burnt out in Newtownards, police said.

It came after police issued a statement warning on Wednesday that they had information “the east Belfast UVF intend to orchestrate and participate in serious disorder in east Belfast this evening” against police officers.

Police said there were reports of a number of cars on fire on the Upper Newtownards Road.

The PSNI said it was reported that “a number of masked males pushed a car into the road and set it on fire close to Robbs Road” at about 9.45 pm.

There was a further report that two cars were set on fire close to Carrowreagh Road.

n Newtownards, police said a bus was hijacked at about 19:30 in Blenheim Drive.

They said the hijack was carried out by a gang of masked men, one carrying a suspected firearm, before it was set on fire.

A number of passengers who were in the bus at the time were not injured.

The police said the bus has been removed and Blenheim Drive reopened.

In a statement today, Assistant Chief Constable Alan Todd said: “The general levels of calls for assistance last night were similar to what we have seen in recent years however we did deal with disorder and disruption which seen 13 vehicles burnt out in Belfast and Newtownards and petrol bombs thrown at my officers in Derry/Londonderry.

“There were also a number of security alerts.

“No part of this is acceptable and today we are looking at the evidential picture to pursue lines of enquiry.

“I would like to pay tribute to the job that my officers, along with other emergency services, did last night.

“The disorder we have seen has been caused by a small minority of people who have no regard for their communities.

“No one wants to see disruption and disorder and the people behind these incidents need to ask themselves just what they are achieving.

“I sincerely hope that today passes off peacefully and that the thousands of people who are attending community events and parades can do so enjoyably and safely.

“I would ask all of those with influence to work with us to ensure the safety of all.

“Our priority remains, keeping people safe and I want to reassure people this morning that our response, should there be an further disorder, will continue to be proportionate with the necessary resources in place to detect and deter those responsible.”