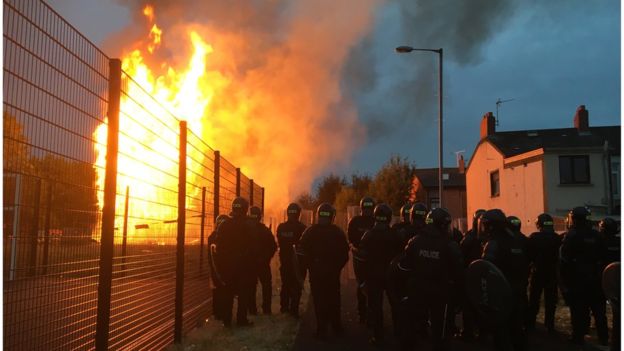 LOYALISTS set fire to an east Belfast bonfire hours after a High Court judge ordered it to be reduced in size over fears for life and homes.

The bonfire on Bloomfield Walkway was lit in the early hours of Wednesday 24 hours before the 11th of July.

The Fire and Rescue service was called in to try and control the flames and protect nearby houses.

A large police operation was also put in place with over 100 police in riot gear present at the scene.

The DfI moved to comply with the court order was made by Mrs Justice Keegan in the High Courtand sought assistance from police to ensure they could safely carry out this task.

Assistant Chief Constable Alan Todd explained: “Unfortunately, as police moved in to secure the site to enable the contractor to safety remove material, people on the site lit the bonfire with total disregard for the safety of the local community and threw missiles at police.

“Colleagues from Northern Ireland Fire & Rescue Service attended to protect a number of nearby properties.

“We also received reports of a number of vehicles having been set on fire in East Belfast.

“It is disappointing that some people decided to resort to violence as attempts were made to reduce significant threat to the life and property of local people, due to the size and location of this bonfire.

“Over recent months there has been a concerted effort by a wide range of agencies and community representatives to resolve this completely avoidable situation.

“I would like to thank those people for their efforts in trying to bring about a resolution to this matter .We all hoped that the bonfire builders would see sense. Regrettably this hasn’t proved to be the case.

“While PSNI is not the lead agency on bonfires and have limited legislative power in respect of bonfires or waste which has been illegally disposed at sites, we will continue to support other statutory bodies to carry out their roles if requested.”