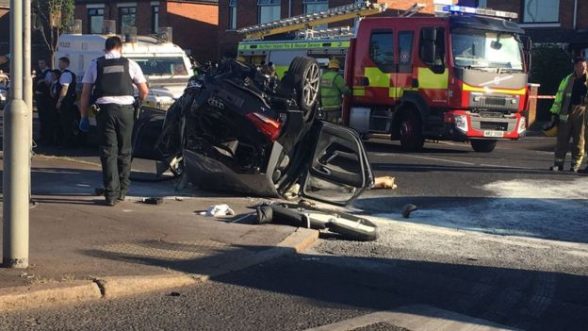 TWO men have been remanded in custody to Hydebank Wood Young Offenders Centre over a six-car crash on the Crumlin Road in north Belfast on Tuesday, July 3.

A stolen A1 Audi car which was being pursued by police struck a tree before careering into other cars near the Ardoyne shops which witnesses said sounded like an “explosion”.

The incident a number of people injured, including one seriously hurt.

Ciaran Ferguson, 22, of Oldpark Road in Belfast, and Caolam Diver, 20, of Antrim Road in the city, who were sporting cuts and bruises, have been connected to a number of charges when the face Belfast Magistrates’ Court for a first remand hearing.

Ferguson is charged with 14 counts including a burglary at Thirlmere Gardens, taking a vehicle, and dangerous driving.

He is also charged with driving whilst unfit through drink or drugs, driving without insurance and whilst disqualified, and faces further charges of causing grievous bodily injury to two people by dangerous driving.

Diver’s face was marked with two black eyes and he was holding his injured arm in front of his body.

He is charged with aggravated vehicle taking causing damage to property, allowing himself to be carried in the stolen vehicle, and possession of diazepam.

As bail was not applied for, both accused were remanded in custody.

Diver will appear again next Wednedsday, July 11 via videolink and Ferguson’s next appearance is on Wednesday, August 1.

An 18-year-old woman has been charged with aggravated vehicle taking causing damage to the vehicle, in connection with the incident.

She will appear in court on the same date as Ferguson.