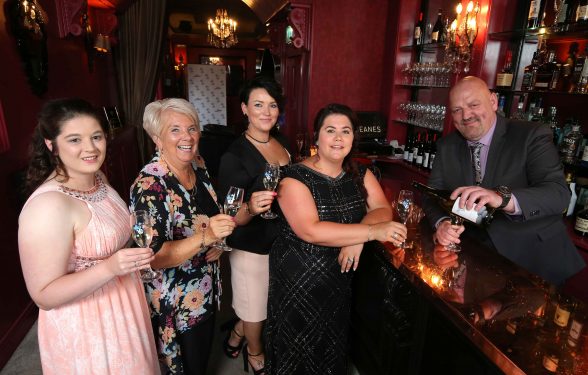 NATIONAL Lottery winners from Northern Ireland came together at one of Belfast’s top restaurants to celebrate 5,000 millionaires across the UK since the very first draw in November 1994.

The winners were also celebrating Northern Ireland’s luckiest lottery year by far with an amazing 14 new millionaires being created here between April 2017 and April 2018 – an average of one millionaire EVERY 26 DAYS!  This brings the total number of National Lottery millionaires in Northern Ireland to an incredible 117.

In all 748 players from Northern Ireland have banked a big prize of £50,000 or more – out of a national UK figure of more than 38,800 big winners across all National Lottery games since 1994.

National Lottery Winners’ Advisor Kathy Garret, who deals with the majority of Northern Ireland’s winners, said: “It’s amazing to think that there have been 5,000 players that have become a millionaire thanks to a life-changing lottery win and an astonishing 117 of them have come from Northern Ireland.

“Whether they believed in luck or fate and no matter how they have spent their winnings, each winner followed the same path; they simply bought a ticket or a scratchcard and joined the lottery millionaires club as a result.  The National Lottery is now creating more millionaires than ever before and we can’t wait to see how many more winners in Northern Ireland join the ever-growing club.”

What would the people of Northern Ireland do with £1M?

A survey of Northern Ireland players has revealed that, along with getting a new home, sharing their winnings with family, friends and giving to charity would be top of the list of things to do after a big win.

While 63% of Northern Ireland folk would fork out for a new home, 44% would splash the cash on helping out family and friends.  We’re also the most charitable region of the UK with 17% saying they would give money to charity – compared to a national average of 12%.

With a massive win it is clear that it wouldn’t just be the winner who would benefit in Northern Ireland.  An impressive 42% admit that they would be tempted to make family members millionaires also, with 21% extending that generosity to include friends.

More than any other region in the UK, 24% of NI players would, if they could, like to make two friends or family millionaires, with 9% saying they would like to create 10-12 millionaires and 3% willing to create more than 20!

Local players would also prioritise experience and travel over possessions or luxury items.  In Northern Ireland, 57% would look to life enhancing events over and above the 13% who prefer materialistic items.

The National Lottery research also reveals that Northern Ireland players would be the most likely in the UK to give up work and have amazing holidays (21%).

Escaping the Northern Ireland weather is also high on the agenda with NI players almost twice as likely as any other region in the UK to choose a villa in a hot country as their dream home.

The best thing about winning?

Contrary to popular wisdom National Lottery millionaires have declared that the best thing about their win isn’t the lifestyle it buys you, but rather the happiness from sharing the cash with others.

Research released by The National Lottery reveals that gifting to friends, family and charity remains the top priority for winners, with almost half declaring that it is the sharing of the win that has given them the most happiness. These gifts include cash, holidays, cars and houses, but in another sign of the win benefitting others for years to come, for a fifth it now means helping others with university fees.

This gifting means that the 5,000 millionaires have created an astonishing 1,750 further millionaires by sharing their windfall.  And National Lottery wins are now also starting to support future generations.  In all 57% of winners will make their child or children a millionaire and 36% believe they will make their grandchildren millionaires in the future.

Winners’ Advisor Kathy Garrett said, “After the shock and excitement nearly all of our winners’ first question is how they can look after their nearest and dearest.  In many cases this seems to be the winner’s even greater joy than thinking about how they can treat themselves.

“I see first-hand the effect a win can have on the circle of people close to a winner, and this always reminds me that at heart people are kind and generous.”