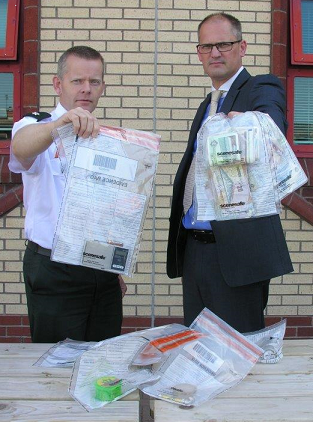 (L-R) Superintendent Jeremy Lindsay and Detective Inspector Blemmings with some of the items, including suspected drugs, seized in the Coleraine area yesterday, Thursday 7 June.

The woman was arrested on suspicion of a number of drugs offences in the Coleraine area, and is currently in custody assisting police with their enquiries.

Detective Inspector Blemmings said: “Drugs not only affect the person taking them; their families and the community also suffer.

“I would ask anyone who has any information about the use or supply of illegal drugs to contact police on the non-emergency number 101.

Today’s arrest follows the detention of five people  yesterday in the Coleraine area – three men aged 30, 23 and 21 and two woman aged 46 and 17 – on suspicion of a number of drugs offences.

Several items, including a quantity of suspected drugs, were seized and have been taken away for further examination. All those arrested remain in police custody.