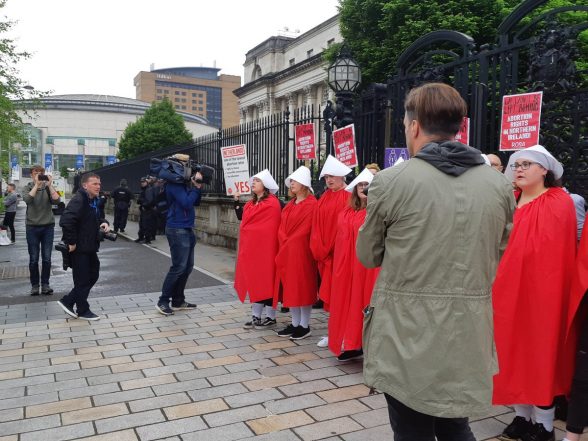 THE PSNI has seized a robot that was intended to deliver abortion pills to women in Northern Ireland.

The incident took place outside the High Court in Belfast this afternoon, Thursday, May 31.

A number of people gathered outside the court to protest against the lack of access to abortion rights in Northern Ireland.

A counter protest was held by anti-abortion campaigners.

Police had warned that pregnant women who take the abortion pills delivered by a pro-choice organisation’s ‘abortion robot’ could face charges.

One woman is currently awaiting trial in Belfast for allegedly giving her daughter an abortion pill.

The robot was part of the Bus4Choice run by social feminist organisation Rosa NI with the support of web-based abortion pills provider Women on Web and Women on Waves.

The group is holding protests across Northern Ireland on Thursday.

The women, who would not disclose their identity or whether they were pregnant, had intended to challenge the law by taking the pills outside the courthouse.

The pills were be delivered by a remote control robot.

A doctor was intending to counsel women remotely, as the robots were operated from the Netherlands in a bid to avoid breaking the law.