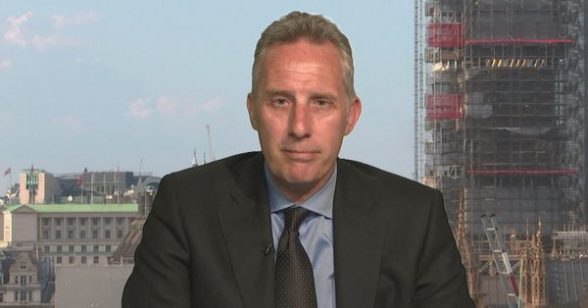 THE Electoral Commission has started an investigation into money paid by Mid and East Antrim Council to sponsor a table at a DUP MP’s constituency dinner.

The commission is focusing on £1,500, which it described as a “donation” to Mr Paisley. He insists the money was paid directly to the hotel.

It comes as figures show NI political parties received over £270,000 in donations and public funds in just three months.

The Electoral Commission revealed the details of funding between January and March 2018.

Under electoral commission rules, councils are not considered “permissible donors” and money from such bodies must be returned.

In a statement, the commission described the money paid as a “donation from Mid and East Antrim Council to Ian Paisley MP”.

Environment Secretary Michael Gove attended the Tullyglass event on 28 September 2017 and was the guest speaker.

In a statement issued on Tuesday evening, the North Antrim MP said: “I can confirm that the Electoral Commission is continuing its investigation into Mid and East Antrim purchase of a table at my constituency dinner last year.”

“I look forward to them concluding this matter soon,” he added.

Mid and East Antrim Council also denied paying any money to the DUP.

A council spokesperson said it received an invitation to a North Antrim Annual Business and Community dinner at the Tullyglass Hotel, hosted and facilitated by Ian Paisley MP, with special Michael Gove.

“Council made payment to the Tullyglass Hotel via electronic payment. No money was exchanged between Council and the DUP. Council will fully co-operate with any investigation,” they said.

Earlier this year, the local government auditor confirmed that it too will be examining the payment made by the council.

Meanwhile, the Electoral Commission has given a break down of £277,039 that Northern Ireland parties received from 1 January to 31 March 2018.

In February, there was criticism of the airport after it emerged it had sponsored a DUP constituency dinner where Ian Paisley interviewed the Conservative MP Priti Patel about Brexit.

The event took place on 23 February 2018 at the Galgorm hotel in Ballymena.

In a statement, the airport said it supported all of Northern Ireland’s political parties “where it is clear that the events they organise are to the benefit of the airport”.

The airport is currently campaigning for the removal of air passenger duty and that means engaging with senior government figures to get its points across, it added.

Of all the donations to parties, the only other one listed outside a company or a public fund was £2,000 in cash from James Kingan to the Ulster Unionist Party’s North Down Association.

The bulk of the cash received by Northern Ireland’s parties came from public funds.

That is grants from the House of Commons, the House of Lords, the Northern Ireland Assembly and the Electoral Commission, which they are entitled to in line with the votes they attract.

The Electoral Commission said Sinn Féin had failed to meet the deadline for reporting donations for the first quarter of 2018.

Ann Watt, head of the Electoral Commission in Northern Ireland, said that was “disappointing”, but she welcomed “the public scrutiny and transparency” that publishing the data brought to the democratic process.

In March, legislation was passed at Westminster to allow donations and loans of more than £7,500 to parties in Northern Ireland to be revealed for the first time.

However, the law only covers donations made to parties from 1 July 2017 onwards.

The decision not to back date the publication of donations prompted criticism about transparency.

Until this year, Northern Ireland was exempt from UK rules that required donations over £7,500 from a single source to a political party to be made public.