BOOST IS ‘TOP OF THE POPS’ IN NORTHERN IRELAND 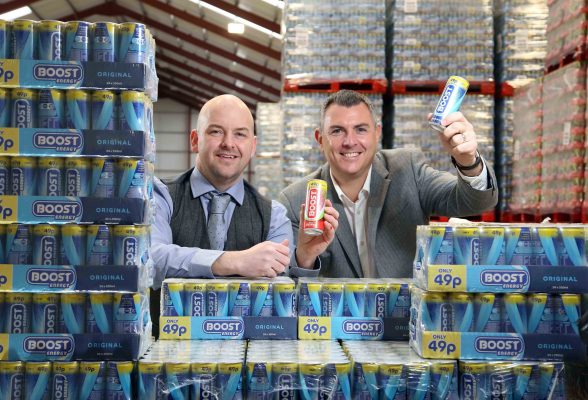 THE incredible success of leading drinks brand Boost in Northern Ireland shows no sign of slowing down with the company occupying the top three positions in the convenience sector’s soft drink sales charts*.

For the first time in its 15 year history here, three Boost SKUs (stock keeping units) are top of the ‘pops’ with volume sales for the three products totalling more than 10 million units across Northern Ireland’s independent retailers.

The convenience sector in Northern Ireland covers more than 1,100 independent retail stores, excluding the large multinational supermarket chains, and the top selling soft drink SKU by some distance is the original Boost Energy 250ml can which retails at 49p – recording sales of more than five million units in the 52 weeks until April 22, 2018.

Boost Energy founder and Managing Director Simon Gray said that to occupy the top three positions ahead of so many other household name soft drink brands is a remarkable achievement.

“The success of Boost has been nothing short of phenomenal since its launch here in 2003,” said Simon, “but in those early years we never could have predicted that one day, we would have the top three selling SKUs in the province.

“It really is remarkable and for this to happen as we celebrate 15 years in Northern Ireland makes it all the more special.

“Northern Ireland is a very important market for us and this achievement really means a lot.  It shows that our strategy of selling Boost exclusively in local independent retail stores and not the big supermarket chains has been the right one for us.

“We are committed to supporting the local home-grown independent retailers who have helped make Boost the huge success in Northern Ireland that it is today,” he added.

HSMNI Managing Director Gareth Hardy said:  “We’ve been working with Boost since it first arrived in Northern Ireland 15 years ago, and to now see the brand occupy the top three soft drink sales positions in the convenience sector is fantastic news not just for us but for wholesalers, retailers and consumers who all love the brand.

“We are delighted to have secured an exclusive five-year deal with the company which has enabled us to invest locally in the brand, including our recent move to a new 30,000sqft warehouse facility in Castledawson.

“Together with Boost, we have a long term strategy which will see us continue to work closely with our wholesale and retail partners to keep growing the brand across Northern Ireland,” he added.