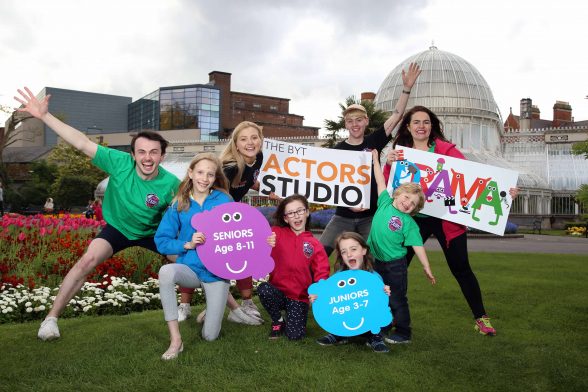 Due to popular demand, six new locations have been added for 2018 in Cookstown, Newry, Omagh, Hillsborough, Newcastle and Whiteabbey with summer camps being held in 17 locations across Northern Ireland.

Also new for 2018 is the BYT Actor’s Studio, a professional TV and film actor training summer camp for ages 12 – 18.

Lisa Duffy, founder and creative director of Bright Young Things said: “The BYT Summer Camps have been enjoyed by thousands of children across Northern Ireland since our launch in 2010 and this year the programme is bigger than ever.

“We now have 17 locations for families to choose giving even more children the opportunity to enjoy an incredibly fun week of drama while they learn invaluable life skills over the summer holidays.

“We have designed a curriculum which gives parents the confidence that while their children are having a fun week, every game, activity and technique that we use is designed to develop their child’s life skills and emotional intelligence, to build their confidence, communication and creativity, whether that is for the stage or the boardroom.

“What’s more, unlike other camps, at BYT we keep age groups separate and deliver a child development stage programme meaning the ‘Juniors’, aged 3 – 7, are not overwhelmed by older children and similarly, the ‘Seniors’ aged 8 – 11, are not put off by being in with younger children,” Lisa continued.

BYT Juniors can look forward to a jam-packed week of drama and confidence games, song, music, dance puppetry and crafts.

Whilst BYT Seniors will learn about acting from the professionals and devise, develop and perform their own show, learn improvisation, script writing, debate, character building, physical theatre, music and dance.

The week will culminate in an end of camp showcase performance for family and friends.

“And with the summer holidays being such an extra busy time for parents, this year we have also introduced early drop-off times which will hopefully make it convenient for any parents dropping off children on the way to work” Lisa concluded.

For further information or to book your child into a BYT Summer Camp, go to www.bytdrama.com/summer