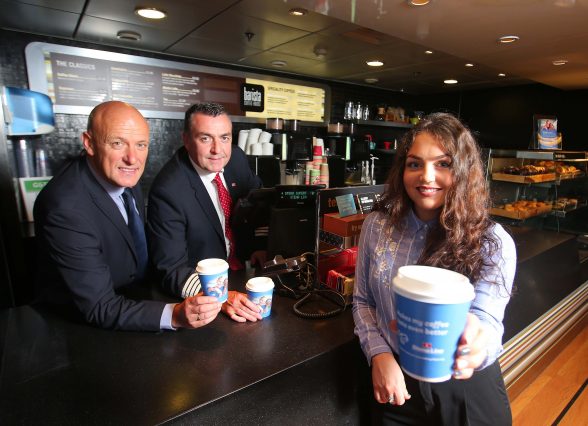 Stena Line launched a Group-wide Coffee Campaign last year to support the Mercy Ships charity in their efforts to deliver free, world-class health care to people in need in the developing world. A key part of the campaign saw Stena Line customers being given the opportunity to choose to buy coffee or tea in a special Mercy Ships mug where 20p was donated directly to Mercy Ships. Pictured at the launch of the campaign were (l-r): Stephen Bryden, Stena Line Onboard Sales and Services Manager (Irish Sea North), Norris McLean, Onboard Sales and Services Manager, Stena Superfast VIII and Anna Hazzard, Stena Line Route Marketing Executive, Irish Sea North.

Stena Line services from Belfast to Cairnryan, Liverpool and Heysham made the most significant contribution to the leading ferry company’s recent charity fundraising award for ‘Company Collaboration of the Year’ at the prestigious Insamlingsforum 2018 held in Stockholm.

A key part of Stena Line’s collaboration was a group-wide Coffee Campaign to support the Mercy Ships charity during which Stena Line customers where given the opportunity to choose to buy coffee or tea in a special Mercy Ships mug with 20p being donated directly to Mercy Ships.

During the 2-month campaign, well over 55 000 cups of coffee were sold across Stena Line’s European route network with over half of the sales coming from its Irish Sea North region which includes its Belfast to Cairnryan, Liverpool and Heysham routes.

Orla Noonan, Stena Line’s Travel Commercial Manager (Irish Sea North) said: “We are absolutely delighted that our local routes have made such a positive contribution to this very worthwhile cause.  Our staff and customers really engaged with this campaign and to be able to account for over half of our total European sales locally is a very impressive performance from our regional team.  We’re very proud of our contribution in helping to be awarded such a prestigious international accolade.”

Orla Noonan added: “The funds raised have already been able to provide the resources to cover 50 life-changing surgeries for people with debilitating conditions such as cleft palates.  Finally, I would like to thank all of our customers who generously supported this important project and expressed such an interest in the great work undertaken by the Mercy Ships charity.”

The humanitarian NGO Mercy Ships organisation and Stena Line went into partnership last February with the aim of raising awareness about the charity, promote volunteering and charitable giving both within Stena Line itself as well as amongst its customers and partners.