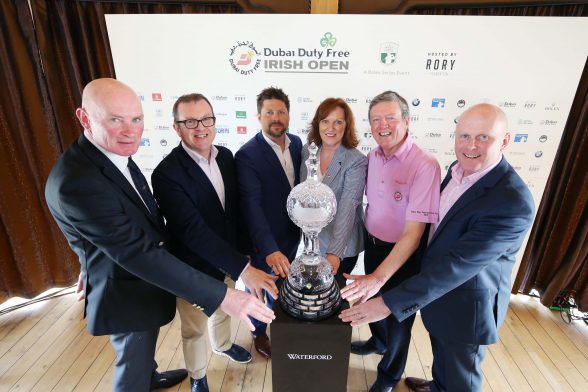 DUBAI Duty Free has agreed a four-year extension of its title sponsorship of the Dubai Duty Free Irish Open hosted by the Rory Foundation, taking the partnership through to 2022.

The historic tournament has reached new heights since Dubai Duty Free began its title sponsorship in 2015, with the prize fund increasing year-on-year from €2.5 million to a record $7 million last year following its inauguration as one of the European Tour’s eight Rolex Series events.

The agreement underlines the commitment of Dubai Duty Free to one of the biggest tournaments on the European Tour’s International Schedule and emphasises its growing prestige since the world-renowned travel retailer came on board three years ago.

This year, the Dubai Duty Free Irish Open hosted by the Rory Foundation will take place at the spectacular Ballyliffin Golf Club in County Donegal, from July 5-8, where World Number Three Jon Rahm will defend the title he won in record-breaking fashion at Portstewart last year.

Following the success of Rory McIlroy’s and his Foundation’s hosting of the tournament, the event will enter a new era next year with a rotation of tournament hosts featuring the biggest names in Irish golf.

From 2019, four more of the island of Ireland’s most revered golfers – The 2014 Ryder Cup Captain Paul McGinley as well as Major winners Darren Clarke, Padraig Harrington and Graeme McDowell – will share the hosting duties with McIlroy, beginning with McGinley next year.

Smyth, who is already a Dubai Duty Free Ambassador, will work closely with the European Tour and the tournament’s future hosts in order to ensure a smooth and consistent evolution of the tournament in the new format over the next four years.

Colm McLoughlin, Vice-Chairman and Chief Executive Officer of Dubai Duty Free, said: “We are delighted to announce our continued sponsorship of the Dubai Duty Free Irish Open, which has grown significantly in the past four years. Thanks to Rory McIlroy and his Foundation for its support and we are looking forward to a fantastic event in Ballyliffin this year.”

Keith Pelley, Chief Executive of the European Tour, said: “Dubai Duty Free has been a fantastic partner since taking on the title sponsorship of the Irish Open back in 2015. They have been fundamental in this tournament’s resurgence and we sincerely thank Colm McLoughlin, Sinead El Sibai and everyone at Dubai Duty Free for their unwavering support and commitment.

“Rory McIlroy has, of course, also been instrumental in this success and we look forward very much to his hosting of this year’s tournament at Ballyliffin. Rory has given us the platform to build for the future and we are very excited at what we can achieve with the new era over the next four years.”

Des Smyth said: “I am thrilled to have been invited to be an Ambassador for the Dubai Duty Free Irish Open for the next four years. It’s an exciting time for this tournament and I look forward to working with the European Tour and all of the tournament hosts over the next four years to help bring this great event to new levels of success.”

Tickets for the Dubai Duty Free Irish Open hosted by the Rory Foundation are on sale at www.europeantour.com/tickets and begin at €20 for Pro-Am Wednesday, with tickets for Thursday and Friday costing €32 and day tickets for the weekend costing €34 each.  An adult season souvenir ticket, which covers five days of world class golf from Wednesday to Sunday, costs just €110.

Concessions are available for customers aged over 60 and between 14 and 17, while children up to 13 are permitted free entry when accompanied by a ticket holding adult.

Official Hospitality tickets are also available on the ticketing page, or alternatively contact the European Tour’s dedicated Hospitality Sales Team, who will be happy to answer any queries and discuss the various hospitality options, on hospitality@europeantour.com or +44 (0) 1344 840681.