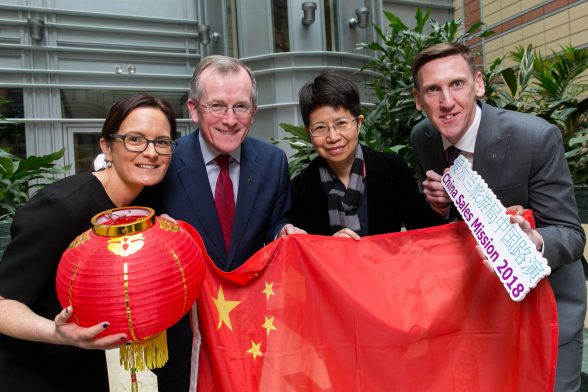 TOURISM Ireland’s biggest ever sales mission to China kicks off today (Monday, 7 May).

A delegation of 29 senior representatives from 24 tourism enterprises from around the island of Ireland is taking part in the targeted mission to Beijing, Shanghai, Guangzhou and Hong Kong – to grow our share of this rapidly-growing tourism market.

Next month sees the commencement of two new flights to Dublin from Beijing and Hong Kong – eight direct flights, representing around 1,700 airline seats each week, for the first time ever from the Asia Pacific Region to the island of Ireland.

This week’s sales mission will involve meetings with representatives of both Hainan Airlines in Beijing and Cathay Pacific in Hong Kong, to discuss how to drive demand for and maximise the promotion of both services.

The mission will also involve meetings with hundreds of leading Chinese travel agents and tour operators.

As well as highlighting the new flights to Dublin, a key message for Tourism Ireland this week is the British Irish Visa Scheme – which allows Chinese nationals to visit both Ireland and the UK, including Northern Ireland, using a single visa.

Niall Gibbons, CEO of Tourism Ireland, said: “China is the largest outbound travel market in the world and one that Tourism Ireland is committed to growing over the coming years.

“In 2017, we welcomed an estimated 70,000 Chinese visitors to the island of Ireland; the introduction of direct flights from Beijing and Hong Kong is a major game-changer and offers a real opportunity for us to build on this number.

“We are confident that we are in a strong position to grow this emerging travel market in 2018 and over the coming years.”

Tourism Ireland has a strong network in China, with offices in Shanghai, Beijing, Guangzhou and Chengdu.

The organisation’s activity in China involves establishing and building relationships with influential intermediaries, including the travel trade, airlines and media – highlighting our natural attractions, cities, castles and proximity to Britain.

In conjunction with Tourism NI and Fáilte Ireland, Tourism Ireland has developed and successfully piloted a new ‘China Ready’ training programme – with more than 20 tourism operators around the island of Ireland participating to date, to learn about the specific requirements and needs of Chinese visitors.