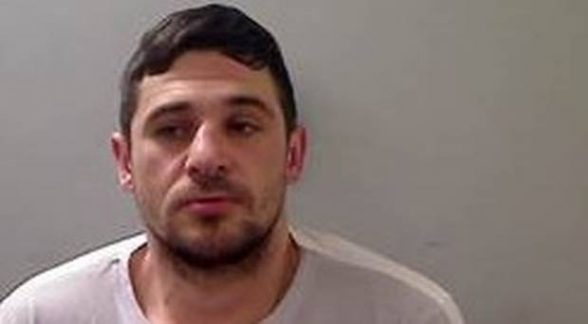 POLICE are on the trail of dangerous and violent criminal Gerard Donegan after a bus lane camera car was wrecked in west Belfast and a woman inside the vehicle was grabbed by the throat.

The 37-year-old, who has spent more than half his adult life in prison, was previously jailed for a brutal hammer attack on a sleeping grandfather in 2003.

Shocking footage emerged last month of a man climbing on top of a Department for Infrastructure vehicle, which had been parked in a bus lane on the Falls Road opposite Dunville Park.

The man is filmed kicking an already broken window and trying to rip off a roof-mounted camera.

After getting off the marked white car, the man, who appeared agitated, grabbed a woman who had been inside the vehicle by the throat. A male colleague at the scene intervened and traded blows with the assailant before wrestling him to the ground.

The PSNI have now taken to social media to reveal they are “appealing for information” regarding Donegan’s whereabouts in connection with the incident.

They said: “Officers investigating an incident of assault and criminal damage in west Belfast last month would like to speak to him as part of their ongoing enquiries.

“A man and woman were assaulted and a bus lane camera vehicle was damaged on Falls Road on April 17.

“Mr Donegan is also currently unlawfully at large after his licence was revoked by the Department of Justice.

“Officers would encourage anyone who knows of his current whereabouts, or has any information that could assist police, to call 101.”