SEX BEASTS TIED UP AND COVERED IN PAINT BY VIGILANTES 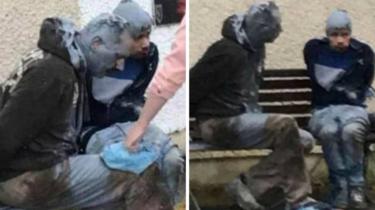 POLICE have taken two wanted men back into custody after they were found tied up on a bench in a village.

James White and Alexis Guesto were wanted for offences including breach of licence and warrants.

Images shared on social media appear to show them tied up and covered in paint after they were caught by vigilantes out hunting their whereabouts.

The police said both men had sustained injuries and have been taken to hospital for treatment.

Two men, James White and Alexis Guesto, wanted by police for a range of offences, have this evening been located in the Mullaghbawn area of south Armagh.

Police were alerted to reports of an assault in the area and upon arrival discovered the two men. Both had sustained injuries and have been taken to hospital for treatment.

Detective Chief Inspector Jill Duffie from PSNI Public Protection Branch said:” I understand that feelings in the area have been running high over the search for these men, however, there can never be an excuse for violence or people taking the law into their own hands.

“We will be investigating the assault and working to identify anyone involved.”

Sinn Féin councillor Mickey Larkin said he believed the men had been covered in paint and that it was “unfortunate but understandable considering the distress the community had been under”.

“Feelings were running high. It’s unfortunate that’s happened but thankfully these two individuals are in police custody,” he said.

He praised the “vigilance of the south Armagh community in relation to these two individuals” and said the “cooperation between our community and the PSNI over the past few days is worthy of praise”. 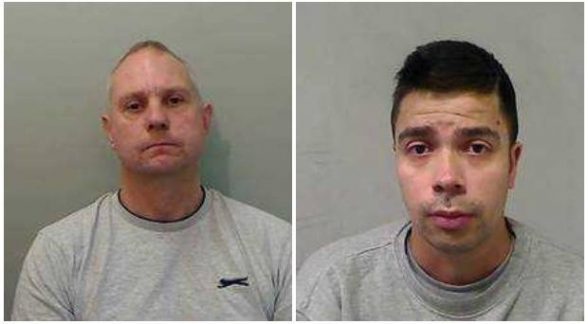 Earlier on Saturday, the police said it was believed the two men had travelled to Northern Ireland from the Republic.

There have been a number of reported sightings of them in south Armagh and Newry, County Down.

On Thursday afternoon, police seized a car from a car park on the Chancellors Road in Mullaghbawn after a member of the public expressed concern