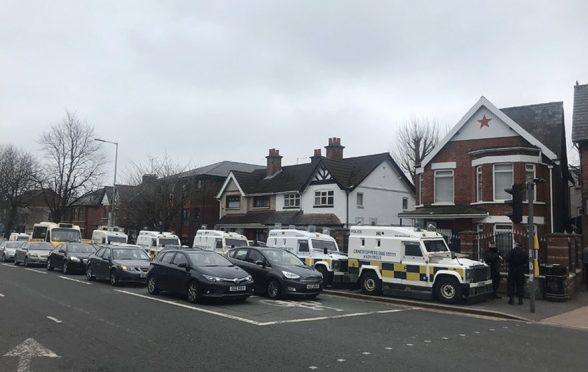 Officers from the PSNI’s Tactical Support Group raiding the offices of the INLA’s political wing, the IRSP, in west Belfast last Friday

Officers from PSNI’s Paramilitary Crime Task Force have arrested a 34 year old man as part of their investigation into the criminal activities of Belfast INLA.

He was arrested in the Belfast area today under section 41 of the Terrorism Act and remains in police custody at this time.

A 55 year old man arrested yesterday as part of the same investigation has been released unconditionally.

Earlier today, two Romanian nationals and 60-yearold Brian Gillan were remanded in custody as part of the investigation, raids and arrests last week as part of the probe into illegal INLA activities, including prostitution and concealing criminal property.

The Police Service of Northern Ireland, HM Revenue & Customs and the National Crime Agency have established the Paramilitary Crime Task Force to tackle criminality linked to paramilitarism as part of the Executive’s action plan on Tackling Paramilitary Activity, Criminality, and Organised Crime.