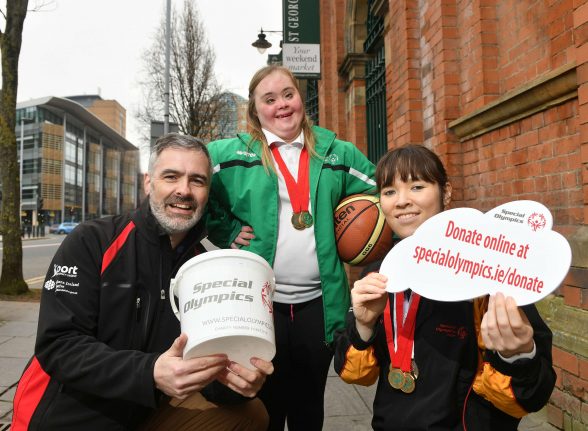 SPECIAL Olympics Ulster has issued a call for its annual Collection Day on Friday April 20th, eager to recruit volunteers and inspire the wider community to give what they can in attempt to raise £80,000 for the charity, which is celebrating its 40th anniversary later this year.

People in towns, villages and cities across Ulster, including Belfast, Derry-Londonderry, Omagh and Newry, are being called on to sign up and volunteer for on-street bucket collections, which will be held across the country from 7am on 20th April; whilst online donations are also available and heavily encouraged.

More than 8,500 athletes with intellectual disabilities benefit from the training programmes provided by Special Olympics clubs throughout the island of Ireland. The money raised each year on Collection Day helps the charity maintain and further develop these crucial facilities.

Volunteers are also invited to get creative with their fundraising by holding coffee mornings, sponsored walks or any fun, inventive charitable events in an attempt to raise the £80,000 in 24-hours.

Ulster Regional Director Shaun Cassidy explained the importance of sport in the lives of people with intellectual disabilities.

“Special Olympics Ireland is first and foremost a sports organization for people with an intellectual disability, but it provides athletes with far more than the physical benefits of sport. Every day we see athletes demonstrate courage, experience joy and share long lasting friendships.”

“We are looking for volunteers from all over Ulster to come and help us in one of the country’s largest charitable days of the year. If you can spare a few hours to volunteer, organize a coffee morning or any fundraising event, your support on the 20th April will help us with our mission to transform the lives of people with an intellectual disability through sport.”

Michelle Toner, Head of Corporate Social Responsibility, eir, stated: “2018 is a particularly special year as Special Olympics Ireland celebrates their 40th anniversary in Ireland. This charity has improved the lives of tens of thousands of athletes and their families throughout the decades.

“On April 20th, our colleagues in eir will be out in force, from Belfast through to Cork, doing what we can to help raise money for Special Olympics Ireland. If you can’t volunteer, you can still help by donating when you see a volunteer in one of 600 locations on Collection Day or donate what you can viaspecialolympics.ie/donate.”

While money raised by Collection Day does go directly go towards the Games, it helps fund and support the training programmes that make them possible.