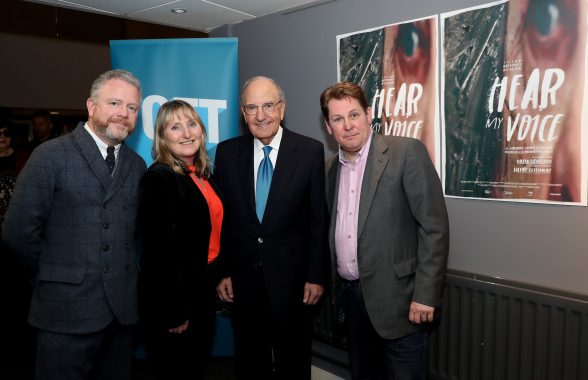 HEAR MY VOICE is an extraordinary cinematic tribute to victims and survivors of the Troubles.

The short film is based on the Silent Testimony paintings by world-renowned artist Colin Davidson which depicts portraits of 18 people who are victims and survivors of the Troubles.

“I first saw Colin’s Davidson’s Silent Testimony when it opened in 2015 in the Ulster Museum. Like many thousands of others, I was struck by its raw power.

“The experience lingered with me for another year or so before I decided to go and meet Colin to talk about Silent Testimony and the prospect of a film.

“While the events depicted in the film happened many decades ago to the film’s contributors, the legacy of those experiences remain as powerful and unforgettable today.

“It is a real honour to have Senator George Mitchell introduce the film this evening, especially given his own tireless efforts in building peace here.”

“I have always said that Silent Testimony is the story I wish I did not have to tell. The 18 people who sat for my paintings have been through the most unimaginable pain and suffering and those experiences live on in each of them and indeed thousands of others today.

“Brendan’s film has captured the spirit of Silent Testimony and serves as further acknowledgement of those lived experiences. Telling these stories must continue if we are to continue to build peace.

“It is particularly poignant that we unveil the film this week with the 20th anniversary of the Good Friday Agreement.”

HEAR MY VOICE will go on to tour a number of film festivals worldwide and will then be screened by the BBC in 2019.

The gala premiere was sponsored by Belfast Film Festival.