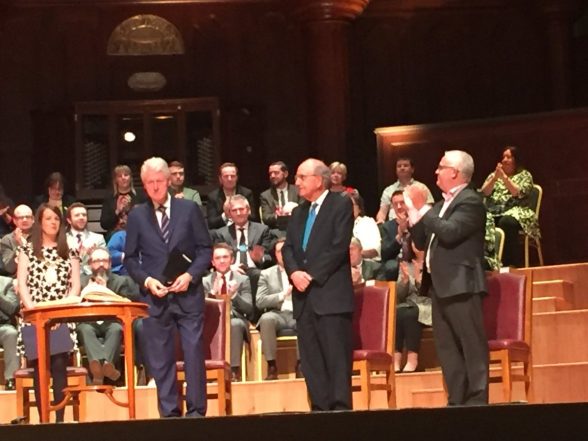 TWO main contributors to bringing peace to Northern Ireland have received the Freedom of Belfast.

Presiddent Bill Clinton and Senator George Mitchell were presented with the honours at the Ulster Hall, once a refuge of music lovers away from the bombs and bullets in Belfast City Centre.

The two American politicians are in Belfast to mark the 20th anniversary of the signing of the Good Friday Agreement, and received the honour in recognition of their services to peace in Northern Ireland.

A series of events were held at Queen’s University of Belfast to mark the historic day.

It should have been held at Stormont but the province has had not government since January 2017 when Sinn Fein’s Martin McGuinness resigned as first minister, saying there would be “no going back to the status quo” with the DUP who he accused of showing a lack of respect.

During a question and answer session,  Mr Clinton said: “The Good Friday Agreement is a work of genius that’s applicable if you care at all about preserving democracy.

“The most interesting thing was by creating a space for the identity and the interests and the values of all the people involved – in a framework which protected democracy and let future demographic, economic and political changes take Northern Ireland wherever it would go – it was a work of surpassing genius.” 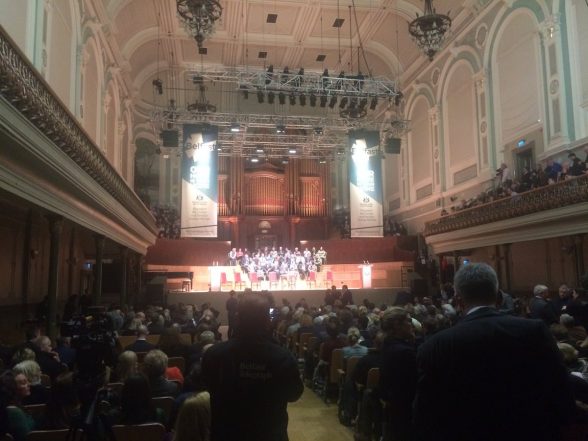 Mr Ahern said “the art of politics is compromise and that you can’t make progress without compromise.”

He said he was aware of the ongoing stalemate between the DUP and Sinn Fein over an Irish Language Act.

“I know that the civil servants running Northern Ireland at the moment are all brilliant people… but we know there are hundreds of decisions not being dealt with because of the stalemate, so isn’t that a good reason to try and end it?

“I wish you well in doing it.”

Former Prime Minister Tony Blair told the packed audience at Queen’s that President Bill Clinton was his “call a friend” during the Good Friday Agreement negotiations.

Mr Blair added: “When anything got really difficult we’d pick up the phone and ask him to help… he was always willing to give us the benefit of his advice.”

At this evening’s event at the Ulster Hall, President Clinton and Senator Mitchell became the only the 83rd and 84th people in the last 120 years to be conferred with the Freedom of Belfast.