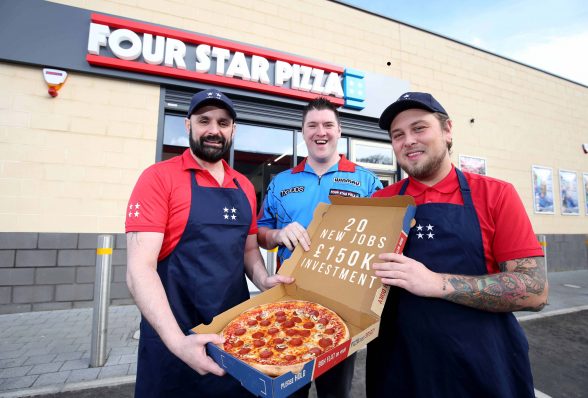 PIZZA lovers in Dundonald are celebrating the news that Four Star Pizza has opened its first takeaway and restaurant in the town with a £150,000 investment which will create 20 new jobs in the area.

The new store, which is the pizza chain’s 50th location across the island of Ireland, was officially opened on Wednesday by Northern Ireland’s very own world number-five darts champion Daryl Gurney.

And it is expected to deliver more than 80,000 FRESH PIZZAS to homes in the Dundonald and Comber areas over the next 12 months – using OVER ONE MILLION pepperoni slices, 10 TONNES of cheese and 17 TONNES of flour in the process.

Scott Higginson, Managing Director of the Dundonald store, as well as other Four Star Pizza franchises in Belfast, Newtownabbey and Carrickfergus, is confident that the new store will go down a treat with locals and explained how the new location will allow Four Star Pizza to keep up with demand in the area.

“We’re delighted to be opening the 50th Four Star Pizza location in Dundonald and it’s been great to have Daryl Gurney here to get the word out!,” said Scott.

“We opened our first store in East Belfast in May 1999 and although the store has been a massive success we have been unable to service a large portion of the Dundonald area.

“The new store will service both Dundonald and Comber, improving the service to our existing customers in the area and hopefully attracting even more local pizza lovers!

“We have invested over £150,000 in the new store, and we’re pleased that we can contribute to the local economy with 20 new jobs to help us meet the anticipated demand from customers in the area,” he added.

And when it comes to tickling the taste-buds of local pizza aficionados, Scott believes that the secret to a perfect pizza is ‘all about the base’.

“What will surprise a lot of our customers is that we actually make our own dough, fresh in store, each and every single day,” he explained.

“We source our two main ingredients – flour and rapeseed oil – locally which makes a big difference between us and our competitors when it comes down to the crucial taste test.”

To celebrate the new store, Scott and his team are offering customers the chance to win themselves some tasty prizes all week on the store’s Facebook page.

“We want to let the people of Dundonald and the surrounding areas know that we are here, so we will have some great prizes up for grabs on our Facebook page this week –  make sure you visit our page for a slice of the action!” said Scott

Four Star Pizza is a wholly Irish-owned Pizza chain, established in 1988, and operates 50 stores across the island of Ireland, including 13 in Northern Ireland.

Its first Northern Ireland restaurant was opened in 1999 on Belfast’s Beersbridge Road and other locations include Bangor, Coleraine, Carrickfergus, Newry, Drumahoe, Derry, Armagh and Newtownabbey.