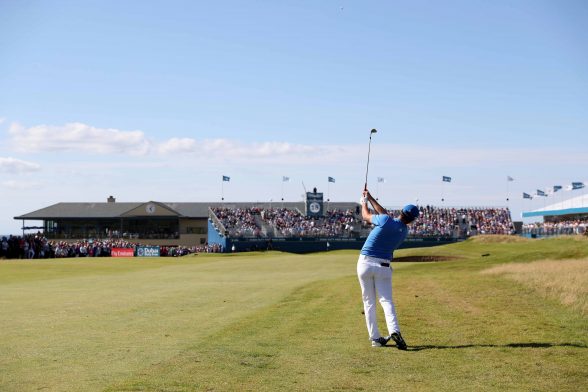 Jon Rahm of Spain hits an approach to the 18th green during day three of the Dubai Duty Free Irish Open at Portstewart Golf Club on July 8, 2017 in Londonderry, Northern Ireland. (Photo by Christopher Lee/Getty Images)

FANS hoping to get an exclusive front-row view of the action for the Dubai Duty Free Irish Open hosted by the Rory Foundation can now ensure they see the drama unfold at close quarters at Ballyliffin Golf Club after 18th grandstand tickets were released today for the prestigious Rolex Series event.

The island of Ireland’s national Open makes its debut at the stunning County Donegal links course from July 5-8 and, with early tournament ticket sales going faster than expected, limited tickets for grandstand access are now available at www.europeantour.com/ticket.

Spectacular views are guaranteed from the 18th grandstand on Ballyliffin’s Glashedy Links, which is regularly rated amongst the best links golf courses in the world.

Last year, fans were treated to an historic spectacle at the Dubai Duty Free Irish Open as Spanish superstar Jon Rahm tore up the record books with an incredible final round 65, which included a hole-out eagle at the fourth hole.

Emotions were high on the final green at Portstewart as the gifted young player soared to a record six-stroke victory courtesy of a 24 under par total, also a tournament record.

Afterwards, Rahm praised the home fans for their raucous support:

“That’s a list of the greatest European Tour players ever, and to have my name next to it, and the last one – Rory McIlroy – it’s so special.

“Not just to win this event but to win it at the place I just won it, and with the fans supporting me better than I’ve ever seen anybody support me. It’s been unbelievable.”

“This event has always been a favourite in the Irish sporting calendar and year-on-year the support is incredible, making it one of the best-attended events on the European Tour.

“We are expecting another world-class Rolex Series field to descend upon Ballyliffin this July with some exciting announcements in store in the coming weeks and months.

“On top of that, fans can also expect outstanding food, entertainment and a wide range of activities in the spectators’ village. Music will once again bring a festival feel to the Dubai Duty Free Irish Open and, combined with the world class golf, it is sure to be a memorable experience.

“This is a week not to be missed in one of Ireland’s most idyllic locations, recently voted the ‘Coolest place on Earth’.

“With ticket sales already ahead of schedule, we are looking forward to an electrifying atmosphere at Ballyliffin in the first week of July.”

Tickets for the 18th grandstand for the 2018 Dubai Duty Free Irish Open hosted by the Rory Foundation begin at £10 for Thursday, Friday and Saturday, while fans can secure their seat for Sunday’s final day action for £15.