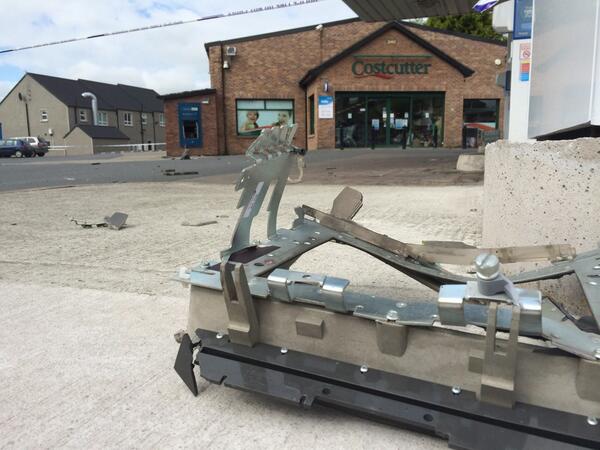 POLICE have welcomed the sentencing of a man at Newry Crown Court, sitting at Dungannon courthouse today, Thursday 15th March 2018, in relation to conspiracy to cause an explosion likely to endanger life or cause serious injury to property.

Ioan Anton, 40, was sentenced to 2 years – 1 year imprisonment and 1 year on licence.

Anton and Pinter were arrested following the attempted theft from an ATM machine at a filling station on Annareagh Road, Hamiltonsbawn (pictured above) during the early hours of Thursday 05 June 2014.

Around 2.30 am police received a report of a loud bang in the area and suspicious activity close to the ATM.

Officers attended and discovered a suspect device involving gas had exploded close to the ATM.

“ATO were tasked and the device was made safe and removed for further examination. Anton and Pinter were arrested later that day and an extensive police investigation involving assistance from law enforcement authorities across Europe has ensued since.

“This was a protracted investigation led by detectives from Criminal Investigation Branch.

“We will continue in our efforts to make Northern Ireland a safer place to live and work by proactively investigating and arresting people involved in criminality.

“Ioan Anton and Gratian-Ioan Pinter became involved in criminality and as a result are now in prison.

“The sentence handed to them at court should act as a deterrent to others.

“We will continue to actively seek out these individuals and bring them before the courts.

“I would like to thank our counterparts in the Garda National Drugs and Organised Crime Bureau who provided essential assistance in bringing these offenders to justice.”