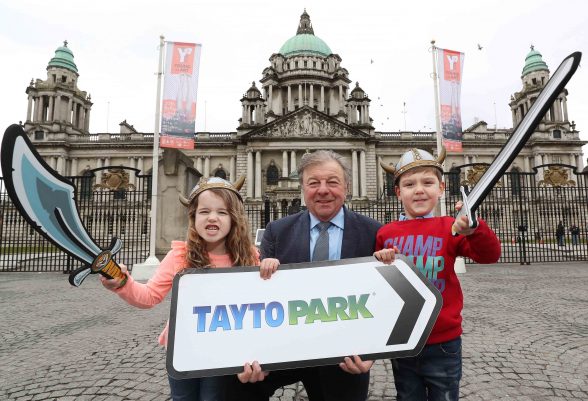 Raymond Coyle, Owner and Founder of Tayto Park with Daisy McLoughlin and Christian Kennedy in Belfast today to launch Tayto Parks new 2018 season with gates opening on Sunday March 18. Irelands only theme park and zoo, based in Co Meath, Tayto Park is one of the most popular attractions on the island of Ireland and has become a huge hit with families and thrill seekers from Northern Ireland who now account for some 25 per cent of all visitors each year. The Park is now gearing up for its biggest season yet with over 100 attractions on site and the promise of more exciting new rides this year

TAYTO PARK, Ireland’s only theme park and zoo, announced today that it will reopen its gates for the 2018 season on Sunday March 18.

The County Meath park is one of the most popular attractions on the island of Ireland and has become a huge hit with families and thrill seekers from Northern Ireland who now account for some 25 per cent of all visitors each year.

Now Tayto Park is gearing up for its biggest season yet with over 100 attractions on site and the promise of more exciting new rides this year.

Owner and founder Raymond Coyle visited Belfast today to launch the new season, accompanied by a selection of birds of prey from the World of Raptors display – one of the Park’s major success stories of last year.

“We’re very excited to announce that Tayto Park will be open for business this year from Sunday March 18,” said Mr Coyle.

“The Northern Ireland market is huge for us, representing more than a quarter of all visitors so we’re delighted to be here today, along with some feathered friends to give people a sneak preview of what they can expect when they visit us this year.

“Last year was huge for us with the opening of our new World of Raptors and Viking Voyage attractions and this year will see us continue our investment to make Tayto Park bigger and better than ever – with a number of new attractions including Ireland’s first ever driving school for kid, which opens on March 24, and a new spinning coaster which is due to open in June.

“With easy access from Northern Ireland and free parking for cars and buses, there really is something for visitors of all ages, whether they be families, couples, groups of friends,schools, birthday parties, or even companies hosting a corporate event,” he added.

The new attractions will complement existing favourites such as the Viking Voyage water flume ride, the gravity-defying Rotator, the Power Surge and The Cú Chulainn Coaster, Ireland’s first rollercoaster and Europe’s first wooden rollercoaster with an inversion.

Tayto Park Zoo is home to an exceptional and diverse animal collection, from meerkats to big cats like the Amur Tiger, and a growing primate collection which includes the Squirrel monkey, Red-bellied tamarins and the Geoldi’s monkey.  The Park also hosts a selection of beautiful and colourful birds from around the globe, as well as the extremely popular World of Raptors birds of prey demonstration.  And for kids wanting to travel back in time, Dinosaurs Alive, Ireland’s only life-size animatronic dinosaur exhibition, features the mighty Tyrannosaurus Rex, Stegosaurus and Apatosaurus.

Aside from the new attractions, a planning permission application has also been submitted to build a 32,000 square-metre, 250 bedroom family hotel which will offer accommodation, spa and leisure facilities for up to 1,000 guests.  The seven-storey hotel will be built from wood to match the look and feel of the Park and will be in a parkland setting.

To celebrate its opening weekend on Sunday March 18 and Monday March 19, Tayto Park is offering a special ‘all in’ €20 ticket which includes entry and wristbands for opened attractions.

Tayto Park caters to a wide range of sectors including primary and secondary schools who can avail of various tours all of which include admission to the park, unlimited access to all attractions and educational aspects ranging from business to ecology and conservation.

This season, the Park will recruit 500 full and part time staff across the parks many attractions, retail outlets, food and beverage and facilities.