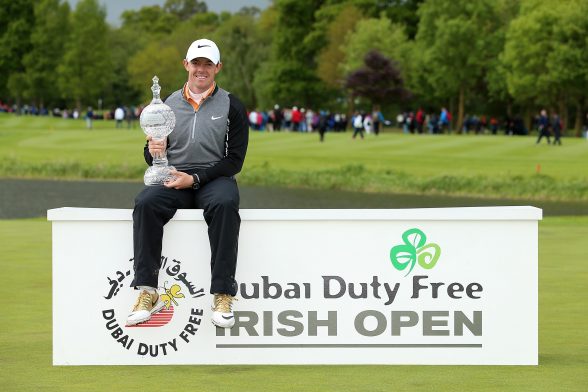 STRAFFAN, IRELAND – MAY 22: Rory McIlroy of Northern Ireland poses with the trophy following his 3 shot victory during the final round of the Dubai Duty Free Irish Open Hosted by the Rory Foundation at The K Club on May 22, 2016 in Straffan, Ireland. (Photo by Andrew Redington/Getty Images)

TIME is running out for golf fans to take advantage of an ‘early bird’ ticket offer for this year’s Dubai Duty Free Irish Open hosted by the Rory Foundation, with the promotion set to end tomorrow (Wednesday February 28) at 23.59 pm on Wednesday February 28.

The 2018 Dubai Duty Free Irish Open is again expected to be the sporting showpiece of the summer when the world’s best golfers arrive in County Donegal for the first time in the event’s long history, to do battle at the spectacular Ballyliffin Golf Club from July 4-8.

Right at the tip of Donegal – deemed the ‘coolest place on the planet’ by National Geographic – the breath-taking landscape of the Inishowen Peninsula will be the setting for a festival of golf and entertainment.

“The event has been raised to a new level in recent years thanks to the support of our host Rory McIlroy and his Foundation, and the commitment of our title sponsor Dubai Duty Free.

“Our ‘early bird’ ticket promotion is always very popular with golf fans wanting to grab the best possible deal on tickets for the event but all good things must eventually come to an end – and sadly this offer must come to an end at midnight on February 28.

“Following the amazing success of last year’s event at Portstewart, we expect this year’s championship at Ballyliffin to be another incredible festival of golf.

“Even at full price, we believe our tickets offer tremendous value for money, but it’s still not too late for all those keen bargain hunters out there to pick up an extra-special last minute deal.

“Staged for the first time ever in County Donegal, this is going to an incredible event for fans of all ages and with free admission for all under 14s (when accompanied by an adult), this is a really brilliant opportunity to book a fantastic day out for the entire family at an unbelievable price.

“We can’t wait to see the world’s best golfers meet on yet another spectacular Irish links course to compete for the coveted title won last year by Jon Rahm.

“You can bet that tournament host Rory McIlroy, along with plenty more star names, will all be doing their best to ensure that the Dubai Duty Free Irish Open trophy remains on home soil.”

As part of the ‘early bird’ offer, Pro Am tickets are on sale for just €10 while a tournament-day ticket can be purchased from €24.

Also under the ‘early bird’ promotion is an outstanding deal offering a season ticket, which includes access to all five days of the event, for only €80.

To take full advantage of these offers before midnight on February 28, fans should visit https://www.dubaidutyfreeirishopen.com/ OR https://www.eventbrite.com/e/dubai-duty-free-irish-open-hosted-by-the-rory-foundation-2018-tickets-35973853765?aff=earlybirdend.

A portion of all ticket sales will go directly to The Rory Foundation, which supports children’s charities around the world and is hosting the tournament for the fourth year running.

The 2018 Dubai Duty Free Irish Open will again be part of the Rolex Series, with a massive prize fund of US$7 million on offer.