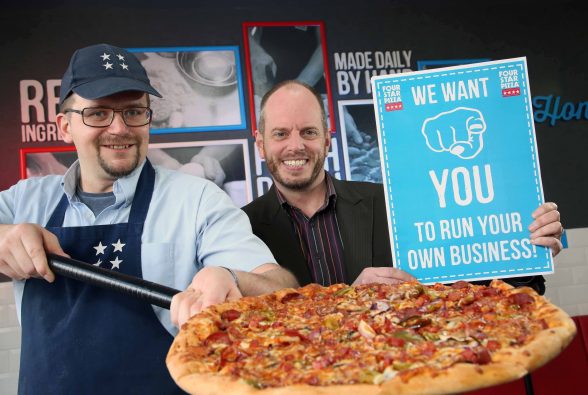 NEW YEAR NEW CAREER?: Four Star Pizza Director Brian Clarke (right) is on the hunt for ambitious Northern Ireland entrepreneurs who would like to make a fresh start and grab a slice of success with one of the countrys largest pizza companies. Four Star Pizza (FSP) is planning to increase its number of Northern Ireland stores from 12 to 30 by 2019 and Brian, pictured here with Bangor store assistant manager Matt Tennant, is encouraging anyone with a good head for business to consider joining the companys growing list of franchisees.

FOUR Star Pizza (FSP) is on the hunt for ambitious Northern Ireland entrepreneurs who would like to make a fresh career start and grab a slice of success with one of the country’s largest pizza companies.

FSP is planning to increase its number of Northern Ireland stores from 12 to 30 by 2019 and is actively searching for local business talent who would like to run their own pizza business.

The Irish-owned Pizza chain, which was established in 1988, opened its first Northern Ireland franchise on Belfast’s Beersbridge Road in 1999 and other locations now include Bangor, Carrickfergus, Newry, Drumahoe, Derry, Armagh,  Newtownabbey and most recently Coleraine which opened its doors in November last year.

Four Star Pizza is keen to spread its network to other areas of Northern Ireland and is encouraging anyone with a good head for business to consider joining the company’s growing list of franchisees.

“The start of any year is a time when many people consider a fresh start or a career change,” said Four Star Pizza Director Brian Clarke.  “Maybe they’re just not enjoying the business that they’re in, or they fancy a new challenge or running their own business.

“With this in mind, we are encouraging any potential entrepreneurs with a good business brain to consider joining our growing network of Four Star Pizza outlets in Northern Ireland and becoming part of a progressive company with a very strong brand.

“In just a few months you could own a brand new business, built around a highly successful model and with all the support you need from a team of business experts to help you to recruit, manage, grow and thrive in your chosen town or city,” he added.

“Becoming a FSP franchisee requires a lot of commitment but we are here to help and we offer an extensive training programme to enable franchisees to reach the required levels in terms of operations, marketing and finance.

“The Northern Ireland market is very important to us and has been steadily growing since the opening of our first Belfast franchise in 1999 so we see this as a huge potential growth area for Four Star Pizza and a great opportunity for anyone wanting to transform their lives in 2018 and beyond,” concluded Mr Clarke.

According to Mr Clarke, interested parties do not need any previous pizza experience as FSP will provide all the necessary training in food preparation, accounts, customer service, delivery and marketing.

Anyone interested in finding out more about becoming a FSP franchisee should call 00 353 1 7037300 or send an introductory email to info@fourstarpizza.ie.

Four Star Pizza is a wholly owned Irish company that operates a total of 48 stores across the island of Ireland, including 12 in Northern Ireland.