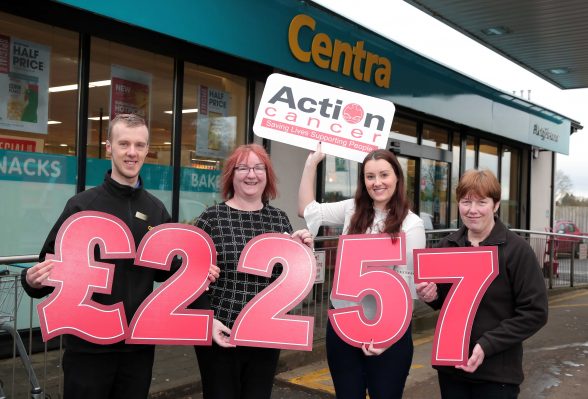 MUSGRAVE and its brands, Centra and SuperValu, have been raising funds for Action Cancer since 2002 and to date they have raised a staggering £2.6 million.

The money raised contributes to the Centra Health Action Programme for schools and the SuperValu Big Bus mobile cancer detection unit, providing a life-changing and, in some cases, a life-saving service to thousands of people across Northern Ireland, explained Desi Derby, Marketing Director, Musgrave.

“Our retailers and colleagues in Musgrave really push the boat out when it comes to raising money for Action Cancer.

“We are passionate about our charity partnership because we know just how much it affects the lives of countless people across Northern Ireland in a positive way.”

One of the main drivers in raising money for the charity is SuperValu and Centra’s Fundraising Week initiative, which takes place at the end of October, continued Desi.

“We fundraise every day at our SuperValu and Centra stores but during Fundraising Week, which is timed to coincide with Halloween, our incredible retailers really ramp up their activity with special events and competitions.

“Because of the retailers’ hard work, we’d like to call out our top three Fundraising Week stores who this year were SuperValu Limavady who raised £4295, SuperValu Omagh who raised £4274 and Centra Portglenone who raised £2257, in just one week – a combined total of £10,826!

“Well done to all our colleagues in Musgrave and all our SuperValu and Centra retailers”, said Desi.

SuperValu and Centra stores across Northern Ireland get very creative in how they raise money during Fundraising Week.

SuperValu Limavady Store Manager, Declan Lane, explained: “Our customers very kindly donated a variety of books which we displayed in our store and those who wanted to could take one home once they made a donation to Action Cancer.”

Action Cancer Corporate Partnership Executive, Amy Reynolds, said: “A big thank you to SuperValu Limavady, SuperValu Omagh, Centra Portglenone, also their staff and customers, who have been raising money to help fund both our school’s programme which has been delivered to over 500,000 young people and the Big Bus mobile unit which travelled to 225 locations last year providing health checks and breast screening.

To find out more about Musgrave (NI) and its SuperValu, Centra, MarketPlace, Mace, Frank and Honest and Chipmongers brands, log onto www.musgravegroup.ie.