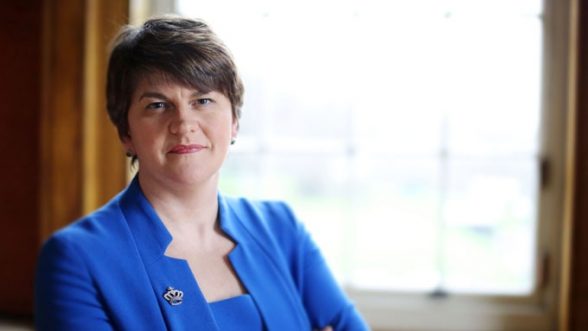 THE talks between the DUP and Sinn Fein have collapsed at Stormont.

DUP leader Arlene Foster said there is “no prospect of agreement” and accused Sinn Fein of trying to hold her party “to ransom”.

In a statement this afternoon, she said: “In our view, there is no current prospect of these discussions leading to an Executive being formed.”

It comes just days after Taoiseach Leo Varadkar and British Prime Minister Theresa May came to Belfast hoping for a deal only to leave “embarrassed” that no agreement had been reached.

The main stumbling blocks are a Gaelic act, equality and rights’ issues.

It means that the North of Ireland is now heading back to direct rule from Westminster.

And Secretary of State Karen Bradley will now have to implement cuts to MLAs salaries as a result.

“For almost four weeks, we have been engaged in intensive negotiations with Sinn Fein.  We have attempted to find a stable and sustainable basis for restoring devolution.  Those discussions have been unsuccessful.

Despite our best efforts, serious and significant gaps remain between ourselves and Sinn Fein especially on the issue of the Irish language.

I have made it consistently clear that unionists will not countenance a stand alone or free standing Irish Language Act.

Sinn Fein’s insistence on a stand alone Irish Language Act means that we have reached an impasse.

As far back as last summer, I outlined my party’s willingness to reach an accommodation on language and cultural issues.  However, I indicated that any such accommodation must be fair, balanced and capable of commanding support on all sides of our community.  At the moment, we do not have a fair and balanced package.

After the Assembly election, I embarked on an engagement exercise with those who love and cherish the Irish language.  I respect the Irish language and those who speak it but in a shared society this cannot be a one-way street.  Respect for the unionist and British identity has not been reciprocated.

In our view, there is no current prospect of these discussions leading to an Executive being formed.

It is now incumbent upon the Government to set a budget and start making policy decisions about our schools, hospitals and infrastructure.

Important decisions impacting on everyone in Northern Ireland have been sitting in limbo for too long.

I had dearly hoped that we could have restored an Executive and local Ministers could have taken those decisions.

That is not possible at this time.

Northern Ireland is best governed by local Ministers who are accountable to local people.

Restoring a sustainable and fully functioning devolved government will remain our goal but we will not accept a one-sided deal.

Any agreement to restore the Executive must be on a sensible basis.

We cannot and will not be held to ransom by those who have refused to form an Executive for over thirteen months.”