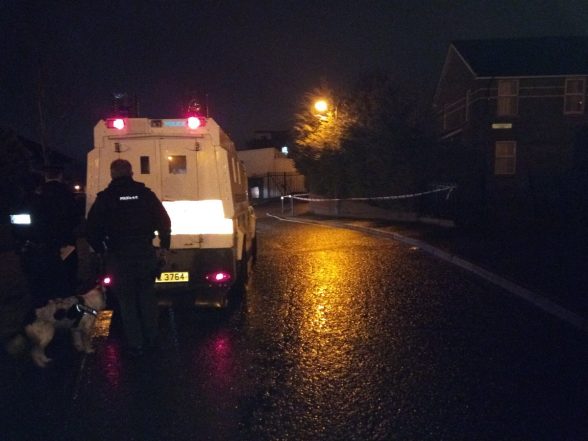 DETECTIVES are appealing for witnesses after a pipe bomb device exploded at the rear of a house in Creeslough Court in west Belfast last night, Wednesday, February 7.

Police were called to a report of a small explosion at the rear of a house shortly after 8pm.

No damage was caused and there were no reports of any injuries as a result of the incident.

ATO attended the scene and examined the remnants of what they describe as being a viable pipe bomb type device.

A number of items have been removed for further examination.

Detective Sergeant Gardiner said: “Those responsible for this reckless attack showed blatant disregard for the occupants of the property and the local community.

“Thankfully, no one was injured when this device detonated in the rear garden of the house.

“The overwhelming number of people in the community do not want this type of activity and we, as a police service, will continue to work to bring those responsible before the courts.

“I am appealing to anyone who witnessed this incident or anyone who knows anything about the circumstances surrounding it to contact detectives at Musgrave Police Station on 101, quoting reference 1198 07/02/18.