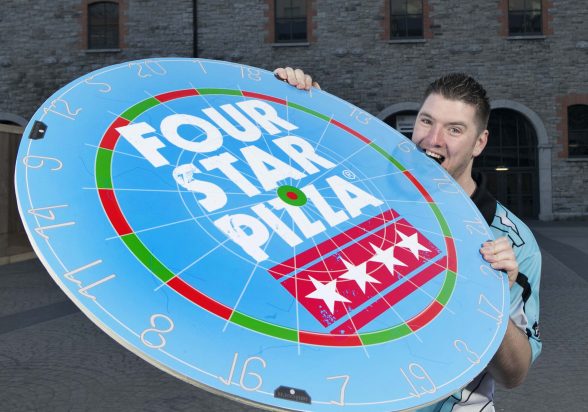 The sponsorship announcement comes as the 31-year-old arrowsmith from Derry prepares to take on “Bully Boy” Michael Smith at the Motorpoint Arena in Cardiff tomorrownight (Thursday), following an opening night draw with Raymond van Barneveld in Dublin last week.

Gurney has made huge strides in the darts world since joining the PDC (Professional Darts Corporation) in 2013, culminating in a magnificent 2017 World Grand Prix victory against Simon ‘The Wizard’ Whitlock in Dublin to win his first televised ranking final.

Four Star Pizza (FSP) operates 12 stores in Northern Ireland and last year announced plans to increase that number to 30 by 2019.

“We’re delighted to announce our partnership with Daryl and are looking forward to supporting another successful darts season for him in 2018,” said Mr Clarke.

“We know that thousands of our customers in Northern Ireland support Daryl in every match so this partnership was a natural fit for us.

“We would like to wish Daryl the best of luck ahead of tomorrow’s match at the Motorpoint arena and we’re sure that lots of his fans across the province will be sitting down with a Four Star Pizza to cheer him on during his live television match against Michael Smith.

“We’ll be supporting Daryl right through the season with some special ‘Superchin’ promotions, as well as opportunities for fans to interact and have some fun on our Facebook page, with prizes and free pizzas to be won during his televised matches.

“I suppose you could say it’s a darts match made in heaven!”

Speaking ahead of tomorrow’s match, Daryl said:  “It’s great to team up with Four Star Pizza as I believe we share the same fanbase! I’m really looking forward to working together over 2018.

Four Star Pizza is a wholly owned Irish company that operates a total of 49 stores across the island of Ireland, including 12 in Northern Ireland.

Established in 1988, FSP opened its first Northern Ireland franchise on Belfast’s Beersbridge Road in 1999 and other locations now include Bangor, Carrickfergus, Newry, Drumahoe, Derry, Armagh,  Newtownabbey and most recently Coleraine which opened its doors in November last year.