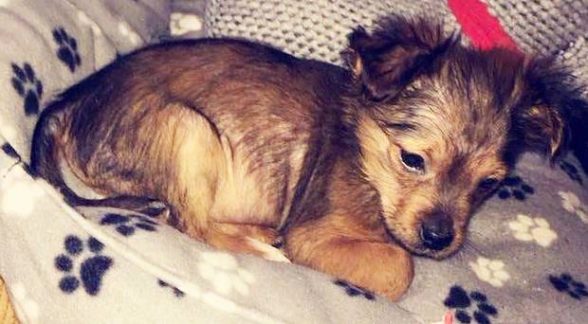 A MAN has been remanded in custody today charge with the brutal hammer death of defenceless puppy ‘Sparky’.

The poor animal was attacked with a hammer in a flat in Lurgan on Saturday and then put in a microwave before being cruelly dumped.

Kyle Keegan, 23, of Gilpins Manor in Lurgan was charged with causing unnecessary suffering to animals at a flat in Ailsbury Park, Lurgan, on Saturday.

There were clashes in court between the 23-year-0ld’s mother and an animal rights after someone shouted “scumbag” Craigavon Magistrates’ Court.

His mother denied this saying he had been brought up “decent”.

A police constable said she could connect the accused to the charge.

The death of 11-week-old ‘Spark’ has provoked a wave of revulsion in Lurgan and across Northern Ireland at the savagery meted out to the pup.

It has sparked outrage on social media and