BELFAST URGED TO TAKE THE PLEDGE TO #BREAKTHESILENCE FOR NEXUS NI 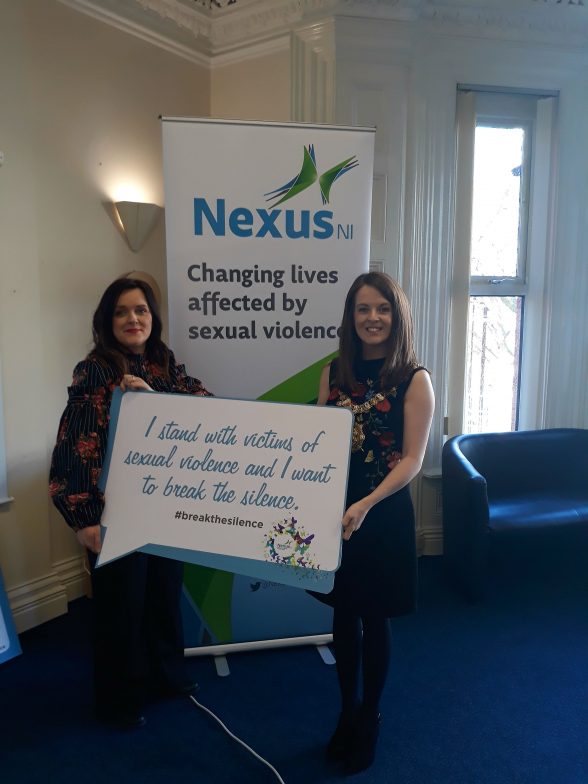 An open office at the Nexus Belfast branch has been officially opened by Lord Mayor Nuala McAllister alongside a week-long series of events organised by the charity throughout the duration of the awareness week, which also included a sold-out conference at the Crowne Plaza Hotel, Belfast. Picture with the Lord Mayor is Cara Cash, Chief Executive of Nexus NI.

NEXUS NI is encouraging residents of Belfast and beyond to take the pledge to do more to #BreakTheSilence on sexual violence during Sexual Abuse and Sexual Violence Week 2018, taking place from 5th – 11th February 2018.

An open office at the Nexus Belfast branch, officially opened by Lord Mayor Nuala McAllister, took place alongside a week-long series of events organised by the charity throughout the duration of the awareness week, which also included a sold-out conference at the Crowne Plaza Hotel, Belfast.

Thursday evening will also see Belfast City Hall light up in Nexus colours to shine a light on the charity, encouraging people from across Northern Ireland to come forward if they have been a victim of any type of sexual violence or abuse.

Nexus NI offers support and services to people who have been affected by sexual violence in any form, this includes sexual assault or harassment, rape, sexual abuse, exploitation or grooming.

“We want to use this awareness week to spread the message that any form of sexual abuse or sexual violence is unacceptable.

“By putting sexual abuse and violence awareness on agenda, we can help dispel any myths and stereotypes and, ultimately, encourage more victims to come forward.

“This week we are encouraging people to share our pledge on social media and help us communicate how important our service is to all victims and survivors of abuse.”

Belfast residents are encouraged to take the pledge via the Nexus social channels and join in the conversation online throughout the duration of the week by following the Nexus hashtag #BreaktheSIlence and the national hashtag #ItsNotOK2018.

The Nexus service is completely confidential.

To find out more or to contact Nexus NI, visit nexusni.org or contact one of the three regional Nexus NI offices;