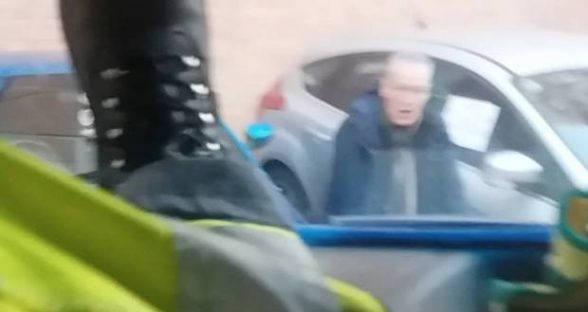 CAUGHT IN THE ACT….Sinn Fein’s policing spokesman captured on camera removing a wheel clamp from his car outside a Belfast city centre gym

SINN Féin’s Gerry Kelly has been questioned by police for criminal damage after he was filmed removing a clamp from his car using a set of bolt cutters.

The North Belfast MLA – who is also Sinn Fein’s policing spokesman – was captured on camera removing the clamp to his silver Ford Focus car outside a Belfast city centre gym.

A set of bolt cutters was used to remove the clamp to the front driver’s side wheel.

It is a criminal offence to unlawfully remove a wheel clamp.

As a result, private clamping company, the Parking and Enforcement Agency, reported the offence to the PSNI.

In a tweet on Sunday evening, Mr Kelly said: “No one can be above the law.” He said he had made a “voluntary arrangement” to talk to police.

The PSNI tweeted: “Police have interviewed a 64 year old man at Musgrave Police Station in relation to an allegation of criminal damage which occurred at Exchange Street, Belfast on Friday, 2 February.”

Footage of the incident was posted on social media.

His actions were criticised by other political parties.

The North Antrim MLA told BBC Radio Ulster: “”He, who sat in the Policing Board, pontificating about law and order issues, should now think that he can take the law into his own hands and behave in this manner needs to be called to account.