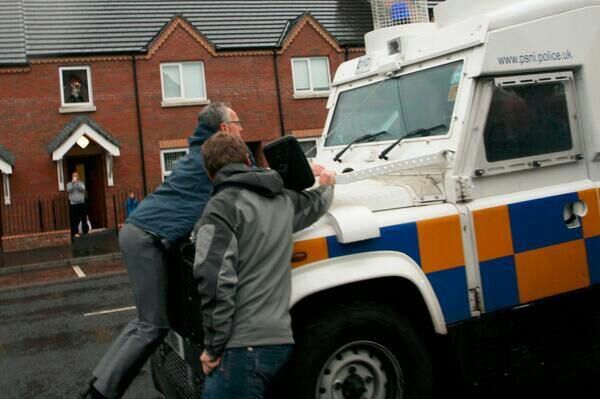 OLD Bailey bomber and Sinn Féin MLA could face prosecution for removing a wheel clamp from his car.

It is a criminal offence to remove a wheel clamp from your car and could result in a hefty fine.

A video of the incident was posted last night on social media of the former Policing Board member removing the clamp from the front driver’s side of his silver Ford Focus car.

A warning notice was also stuck on the driver’s side window.

Sinn Fen said in a statement Gerry Kelly removed the clamp at about 07:20 GMT on Friday outside a gym.

The party spokesperson said that the matter is being dealt with by Mr Kelly’s solicitor.

They said: “Gerry Kelly returned to his car​ after an early morning gym session to find that his car had been made immobile by a clamp just after 7.20 am.

“He removed the clamp from the front wheel.

“He left the device nearby and drove off to pre-arranged meetings.

“His solicitor is dealing with the matter and he will be making no further comment at this time.

In 2013, Kelly sparked ‘Landrovergate’ when he to block a police Land Rover during nationalist protests at an Orange Order parade in Belfast last summer.

Unionists demanded that Gerry Kelly be charged after he was carried for a short distance, clinging to the front of the vehicle, when he claimed he tried to speak to officers involved in the arrest of a teenage boy.

Police and the Northern Ireland Police Ombudsman Michael Maguire investigated the incident at Carrick Hill last June during the loyalist Tour of the North parade, and a file was sent to the Public Prosecutions Service.

But there will be no prosecution. Instead, Mr Kelly, an MLA for north Belfast, was given an “informed warning” by police.

A police officer involved in the incident was given a formal reprimand.