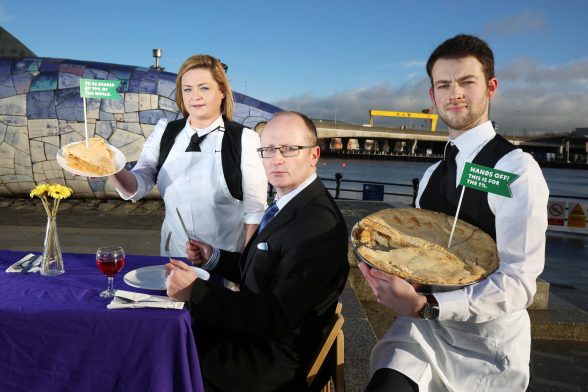 Table for one percent… Ahead of this week’s meeting of the world’s elite in Davos, Oxfam campaigners on inequality set up a mini restaurant in Belfast city centre to illustrate the huge gap between rich and poor. Eighty-two percent of new global wealth last year went to the richest one percent, while the poorest half saw no increase, according to a new Oxfam report. Photo by Press Eye/Darren Kidd.

EIGHTY-TWO percent of wealth generated last year across the world went to the richest one percent of the global population, while the 3.7 billion people who make up the poorest half saw their wealth flatline, according to a new Oxfam report published today.

Reward Work, Not Wealth sets out how the very biggest gains were made by billionaires. Oxfam said it was unacceptable and unsustainable for our economies to continue to enable a super-rich minority to accumulate vast wealth while hundreds of millions of people struggle to survive on poverty pay.

It called for a rethink of legal and business models that prioritise shareholder returns over broader social impact.

As political and business elites gather in Davos for the World Economic Forum, Oxfam campaigners in Belfast city centre set up a mini restaurant – with unequal servings – to illustrate the huge gap between rich and poor.

Jim Clarken, Oxfam Ireland’s Chief Executive, said: “Something is very wrong with a global economy that allows the one percent to enjoy the lion’s share of increases in wealth while the poorest half of humanity miss out.

“In the 12 months to March 2017, billionaires’ fortunes grew by a staggering £585 billion [$762 billion] – enough to end extreme poverty more than seven times over.”

Oxfam has previously identified the role of tax dodging in driving inequality.

This year its report highlights how the excessive corporate influence on policy-making, erosion of workers’ rights and relentless drive to minimise costs in order to maximise returns to investors all contribute to a widening gap between the super-rich and the rest.

Billionaire wealth rose by an average of 13 percent a year between 2006 and 2015 – six times faster than the wages of ordinary workers. It takes just four days for a CEO of one of the world’s five biggest fashion retailers to earn as much as a Bangladeshi garment worker will earn in her entire lifetime.

Women consistently earn less than men and are concentrated in the lowest-paid, least-secure forms of work.

At current rates of change it will take 217 years to close the global gap in pay and employment opportunities between women and men.

Oxfam has heard from women in Vietnamese garment factories whose low wages force them to live apart from their children, women in the US poultry industry who wear nappies because they are denied toilet breaks, and women working in hotels in Canada and the Dominican Republic who stay silent about sexual harassment for fear of being fired.

Clarken added: “The world has made huge strides forward in ending poverty but progress could be even faster if we did more to break down the barriers that are holding back the world’s poorest people.

“For work to be a genuine route out of poverty we need to ensure that ordinary workers receive a living wage and can insist on decent conditions, and that women are not discriminated against.

“If that means less for the already wealthy then that is a price that we – and they – should be willing to pay.

“Leaders should ensure that wealthy individuals and businesses pay their fair share of tax by cracking down on tax avoidance, and invest this into essential services like schools and hospitals, and creating jobs for young people.”

A new survey of 70,000 people in ten countries, including the UK, demonstrates huge support for action to tackle inequality.

Nearly two-thirds of people – 72 percent in the UK – say they want their government to urgently address the income gap between rich and poor in their country.

In the UK, when asked what a typical British CEO earned in comparison to an unskilled worker, people guessed 33 times as much.

When asked what the ideal ratio should be, they said 7:1. In some sectors the reality can be very different.

FTSE 100 bosses, for example, earn on average 120 times more than the average employee.

Clarken added: “Many leaders say they’re worried about the corrosive effect of inequality but their tough talk too often fades away at the first resistance. Some companies and wealthy individuals are taking steps towards fairer ways of doing business but too many others use their power to protect their own interests. To really transform our economies, we need to look again at the business models and laws that prioritise shareholder returns above wider social benefit.”

Tax avoidance by businesses and wealthy individuals is estimated to cost developing countries and poor regions $170 billion a year – money that could be used to fight poverty and provide public services.

In the UK, Oxfam is urging the government to help fight tax dodging by using its upcoming Sanctions and Anti-Money Laundering Bill to ensure that Britain’s overseas territories publish the owners of companies incorporated on their shores.

The Paradise Papers revealed the key role that UK-linked tax havens such as Bermuda play in facilitating global tax avoidance.