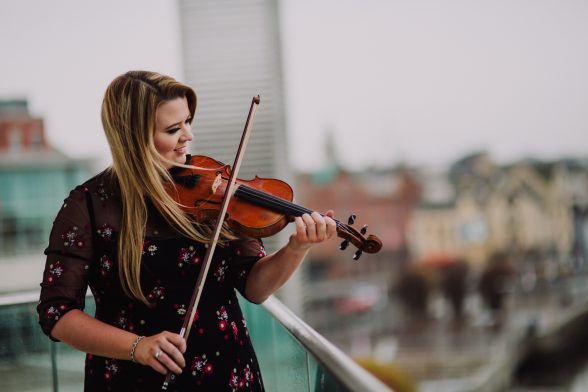 AS the countdown begins for the biggest night of the year for traditional Irish music, stars from the stage and screen are getting set to descend on Belfast.

Big names including actor, Stephen Rea and Matt Molloy from The Chieftains have been announced as part of the line-up for TG4’s traditional Irish Music Awards, Gradam Ceoil, which take place at the Belfast Waterfront on Sunday 4th February, 2018.

This is the first time in its 21-year history that the prestigious Gradam Ceoil concert will take place in Ulster.

Known as ‘the Oscars of traditional music,’ and revered by trad fans across Ireland and beyond, the live concert and awards ceremony takes place at the Belfast Waterfront on Sunday 4th February, 2018 and will be broadcast live on TG4 at 9.30pm.

Featuring the crème de la crème of Irish music and song, Gradam Ceoil celebrates the talent and achievements of musicians from Ireland and across the world.

The recipients, who represent world-class traditional music talent, will take to the stage to perform unforgettable pieces, alongside a top bill of well-known faces for what will be an absolutely unforgettable show.

To find out more, visit www.gradam.ie or connect with Gradam Ceoil on Facebook, facebook.com/gradamceoil or Twitter, @GradamCeoil or search the #Gradam hashtag.

A total of seven awards will be given out on the night, with live performances from:

Legendary fiddle player, Frankie Gavin, the founder member of acclaimed group, De Dannan heads the list of recipients as Musician of the Year.

A native of Galway, Frankie has played and recorded around the world, collaborating with everyone from The Rolling Stones, Elvis Costello, Stéphane Grappelli, Earl Scruggs and Sir Yehudi Menuhin.

He and his band have also played for three American presidents: Clinton, Bush and Obama.

In 2010 he became reputedly the fastest fiddle-player in the world, with an entry in the Guinness Book of Records.

The Lifetime Achievement Award goes to the hugely influential Patsy Hanly from Co. Roscommon, who has taught and performed at festivals worldwide. In a fitting tribute and a hugely exciting collaboration, Patsy will be joined on stage by Matt Molloy from The Chieftains.

Lisburn based World Champions, The Field Marshal Montgomery Pipe Band – recipients of the Special Award –  will open the show with a special montage filmed in iconic locations around Belfast, ahead of a rousing live performance later in the night.

Widely considered at the pinnacle of their game on a global scale, The FMM have brought Irish traditional music to audiences and peers across the world, and have set standards of excellence that others aspire to.

Their special award will be presented by leading uilleann piper, Robbie Hannan.

Young Musician of the Year, Clare Friel from Glasgow has emerged as one of the most exciting young traditional musicians on the scene today.

Her family background epitomises the shared identity and heritage between Donegal and Scotland, whilst her repertoire of songs reflects this history of migration and the cultural traffic that has made such an imprint on traditional music here in Ireland.

Her award will be presented by special guest, Mairéad Ní Mhaonaigh from Altan, also a previous Gradam Ceoil recipient.

One of the sweetest voices in Irish music, Cork woman Máire Ní Chéileachair is the Singer of Year. Equally respected as a singer and teacher, she has been teaching sean-nós singing in her native area for many years in the Aisling Gheal scheme. She will be joined on stage by acclaimed singers Nell Ní Chróinín and Concubhair Ó Luasa.

Last but by no means least, a special Musical Collaboration Gradam goes to a courageous collaboration that grasps the complex music of Tommy Potts and his iconic recording, The Liffey Banks in CONCERT.

CONCERT is a courageous collaboration led by one of our leading Irish traditional dancers, Colin Dunne. Directed by Sinéad Rushe, with soundscore from acclaimed composer Mel Mercier, Colin’s dancing grasps the complex music of Tommy Potts. Although renowned for its subtle, emotional and spirited qualities, this album’s rhythmical irregularity renders it practically impossible to dance to – or so it would seem.

The collaboration of Dunne, Rushe and Mercier set out to achieve what some may have deemed impossible, yet the result, though complex is breath-taking, insightful, respectful, as well as highly entertaining.

Tickets for TG4’s Gradam Ceoil 2018 are available from www.waterfront.co.uk or by phone on 028 9033 4455, priced £25 (£22 for concessions). Visit www.gradam.ie  for further information or connect with Gradam Ceoil on Facebook, facebook.com/gradamceoil, Twitter, @GradamCeoil or search the #Gradam hashtag.