THE GLOBAL CAR HIRE INDEX: THE CHEAPEST AND MOST EXPENSIVE PLACES REVEALED 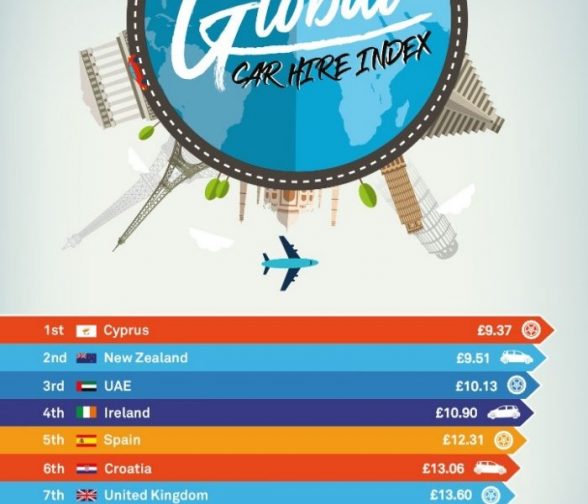 WITH Holidaymakers now looking to forget those January blues by booking themselves a cheeky holiday, TravelSupermarket have analysed car hire costs for the exact same categories of car, across the same dates to establish which countries and regions are the most cost-friendly when it comes to renting a car.

By analysing 19 popular holiday hotspots and UK cities, the price comparison site has been able to pinpoint which countries enable travellers to get around on the cheap in 2018.

The cost of hiring the same car on your holidays could vary by up to 245% depending on where you are in the world, according to new data from TravelSupermarket.

Through analysis of enquiry data* for cars in the Compact, Economy and Mini categories (including cars such as the Ford Focus and the Fiat 500) in December, the research pinpoints exactly where countries all over the world fall on the car hire cost ladder.

Most expensive countries for car hire ranked by cost per day:

Costing 237% more per day than the UK, Greece was found to be the most expensive place to hire a car, at an average cost of £32.29 per day. This was closely followed by Iceland at £30.37 and Canada at £27.73 while popular European hotspots France and Germany round out the top five with costs of £25.03 and £21.71 respectively.

Britain was 13th most expensive on the list of countries analysed with an average cost of £13.60 and only six countries were found to have a lower average daily hire price than the UK. Cyprus comes in cheapest at £9.37 and New Zealand just behind as the least expensive non-European option at £9.51.

Spain, a firm holiday favourite for many Brits was found to be in the top five cheapest options, only costing an average of £12.31 per day, less than half the daily cost for car hire in France.

Interestingly, the United States, a summer holiday favourite was not amongst the most popular destinations for Brits looking to hire a car this month.

Most popular car hire searches for period Of December 2017*