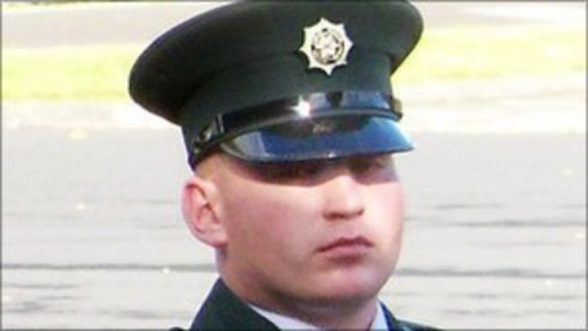 DETECTIVES from the PSNI’s Serious Crime Branch are making a renewed appeal for information about the murder of Constable Ronan Kerr in Omagh in April 2011.

The 25-year-old officer died after a bomb exploded under his car as he left his apartment in Highfield Close at 3.45 pm on Saturday 2 April 2011 to go to work in Enniskillen.

The officer now leading the investigation, Detective Chief Inspector John Caldwell, said that although detectives were following a number of ongoing lines of inquiry he believes there are witnesses in the community who may hold the key to vital evidence.

DCI Caldwell said: “Detectives have made a significant amount of progress in the investigation into the murder of Ronan, however we are particularly interested in the origin of some of the component parts of the bomb, and how they were sourced.

“We have already made good progress in tracking how the terrorists came into possession of these parts, as well as establishing their relationship with a local crime gang in the Omagh area.

“However, I believe there are still potential witnesses who may be able to assist police in this line of enquiry. The key to putting people before a court charged with Ronan’s murder lies with local communities in Omagh and east Tyrone.”

Since the investigation into Constable Kerr’s murder and a series of linked incidents began, the inquiry has generated a substantial amount of investigative activity:

DCI Caldwell added: “Ronan’s family deserve to see his terrorist murderers behind bars where they belong.

“They remain as devastated as they were when he was killed nearly 7 years ago.

“This has been a lengthy and complicated investigation incorporating several linked incidents including attempts to murder other police officers, a bomb attack, arms finds and armed robberies.

“There is significant potential to bring other individuals before the courts and we need people in the communities of Omagh and east Tyrone to come forward with anything they know, particularly about the origin and sourcing of the component parts of the bomb.

“We will continue to pursue our live lines of enquiry.

“I would urge those people who know who was involved in the events and activities surrounding Ronan’s murder to come forward.

“If you can assist in any way by providing information, please do so. It is the right thing to do. Ronan and his family deserve justice.”

Anyone with information is asked to contact detectives in Serious Crime Branch at the Maydown police station on the non-emergency number 101.