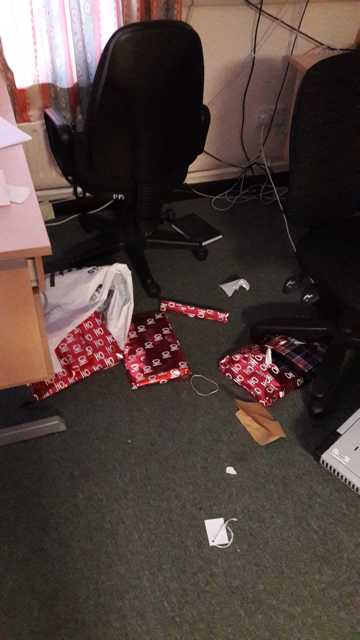 The scene at the children’s home on Hollybank Park following the burglary.

Police in Ballymena are appealing for information about a burglary at a children’s home in the Hollybank Park area of the town earlier this week.

Chief Inspector Simon Ball said: “Yesterday we were informed that a children’s home had been broken into during the evening of Tuesday 19th December.

“We believe that this was around 9pm.

“Thieves stole a number of Christmas presents and caused damage to a window, office equipment and furniture.

“This was a sickening and disgusting act, stealing Christmas presents from children.

“I am appealing to anyone who knows anything about this burglary to contact police in Ballymena on the non-emergency number 101, quoting reference number 277 of 20/12/17.

“Please call us if you know anything and stop these thieves from ruining anyone else’s Christmas.”