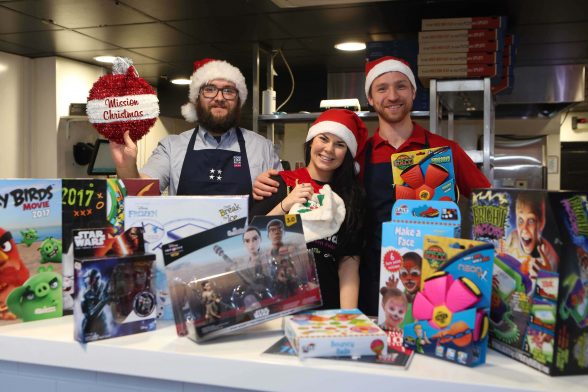 Almost 1 in 4 children live in poverty in our area and around 11,123 applications have been made for gifts this year, so the Mission Christmas campaign is asking people to buy an extra present that will be distributed to a deserving local child or young person who will otherwise wake up to nothing on Christmas morning.

The gift should be new, unwrapped and suitable for children and young people aged 0-18 years.

Final gift donations must be made before Monday the 18th of December to allow time for gifts to be distributed.

This year, those who wish to support the campaign can drop off extra gifts at any of Four Star Pizza’s Belfast stores, as well as at their Newtownabbey and Carrickfergus branches.

Pizza lovers can also donate an extra gift to the Cash for Kids Mission Christmas appeal by giving it to a Four Star Pizza delivery driver when receiving a delivery from any of the above branches.

“Christmas is a brilliant time of year for everyone especially children who are looking forward excitedly for a visit from Santa Claus, however the festive season is also a time to remember those less fortunate than ourselves who may be without lots of presents and gifts from loved ones.

“We’re proud to be involved in the Mission Christmas appeal which helps so many families across Northern Ireland each year and we are encouraging any customers who would like to get involved to feel free to leave their extra gifts at any of our Belfast, Carrickfergus or Newtownabbey stores.

“We would also like to take this opportunity to say a big thank you to our team members who support the Mission Christmas appeal for all their time and effort each year, as we would not be able to do it without them.

It’s also worth remembering that our drivers will be collecting any extra gifts from customers during their deliveries this year so there are plenty of ways to get involved,” added Scott.

“We would like to thank Four Star Pizza for their continued support over the last numbers of years by acting as collection points for extra gifts, picking up gifts from customers and delivering pizza to our volunteers each year during our main gift packing night.

“Last year Mission Christmas supported over 13,361 children, and we are anticipating the need being even greater this year. We would encourage anyone who is able to support the campaign to simply buy an extra gift this year and drop it off to your nearest collection point.

“This year we are particularly short of gifts for children aged 10+ and so we urgently need items for children within this age group,” added Stephanie.

Some gifts suggestions for those wishing to support the Mission Christmas appeal are:

For more information or if you are unable to provide an extra gift but wish to make an online donation to the Mission Christmas appeal, you can visit www.coolfm.co.uk/mission

Four Star Pizza is a wholly Irish-owned Pizza chain, established in 1988, and operates 48 stores across the island of Ireland, including 12 in Northern Ireland.