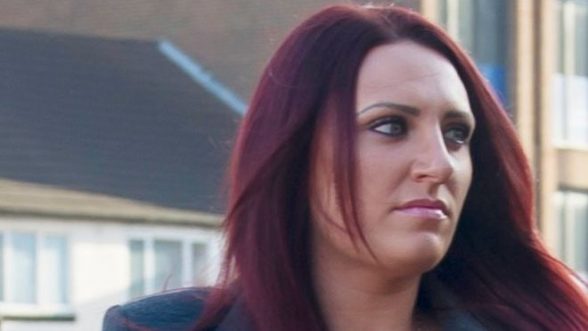 BRITAIN First’s deputy leader Jayda Fransen is to face a court in the morning charged over a race hate video rant against the Islamic Centre in Belfast.

She has been charged this evening and will spend the night in custody at Musgrave PSNI station ahead of her appearance at Belfast Magistrates’ Court on Friday, December 15.

The 31 year old woman was arrested in Laganside court complex today minutes after she was bailed over a speech she gave in Belfast in August.

Fransen has now been charged with using threatening, abusive or insulting words or behaviour.

The charges are in relation to an incident at a peace wall in Belfast on Wednesday 13th December.

The charges were a breach of police bail following her interview by the PSNI last month over the August speech.

Her boss, Paul Golding, was arrested this morning at Laganside court complex while escorting Fransen to the Belfast court to facing charges of using threatening, abusive or insulting words or behaviour.l

Golding was charged this evening with using threatening, abusive, insulting words or behaviour over the August rally

He is due to appear at Belfast Magistrates’ Court on Wednesday, 10 January 2018.