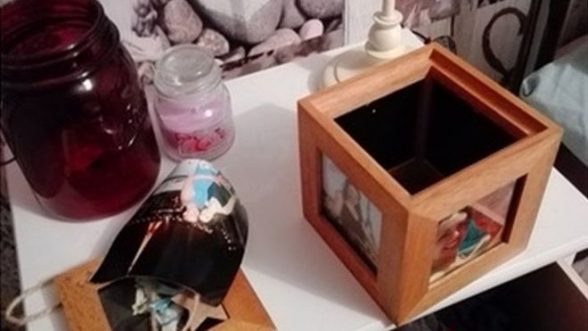 POLICE in North Belfast are appealing for information about a burglary during which a baby’s ashes were stolen.

Claire Smallwood, whose daughter, Holly, was stillborn last November, said she was “absolutely devastated, angry and sickened” by the theft.

Holly’s ashes were in a small plastic bag that was kept in a wooden box on Ms Smallwood’s bedside table, adorned with family photos.

“The police believe they (the thieves) thought it was drugs,” Ms Smallwood told BBC News NI.

“We don’t care about whatever sick person has done this we just want our Holly back.

“The worst thing about it is that when they realise what it is, and that it is no good to them, they will probably just throw it away like it’s nothing, but it’s everything to me.

“I feel like I have lost her twice and it feels even worse this time,” she added.

“The only hope I have is that someone sees our appeal and feels bad.”

Ms Smallwood has asked that anyone who is out walking in the area keep an eye out for a small clear bag with a knot tied at the top, in case it has been discarded.

Inspector Paul Noble said: “During the burglary, which we believe occurred between 6:15pm and 9:30pm yesterday evening, a small clear bag from a wooden box which contained the ashes of the victim’s deceased baby daughter was taken.

“Understandably, this has left the victim extremely distressed, therefore, we are appealing to whoever entered the property last night to please do the right thing and return the bag to police.

“We are also appealing to anyone who was in the Ballygomartin  Road area last night between 6:15pm and 9:30pm and noticed any suspicious activity, or anyone who knows anything about this burglary, to contact police at Tennent Street on the non-emergency number 101, quoting reference 1338 of 12/12/17.