IF you have a sweet tooth, Southern France is the place to be for some of the most well-known sweet brands in the world.

I Know many of us will be filling the stockings with offerings from the large supermarkets but where do all these goodies come from?

Think Haribo and Valrhona and you would be on the right track, easily accompanied by some outstanding Rhône Valley dessert wine!

If you want to up the anti on the Jones’s, then considering some beautiful gifts from this delightful park of France and it might just inspire you to visit! 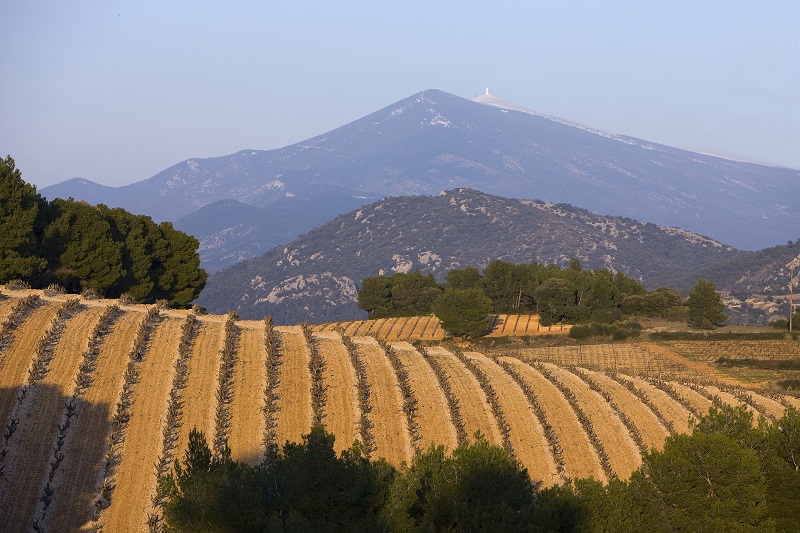 The sweet accompaniment – Wherever you go and whatever you eat in Southern France, it’s almost mandatory to accompany it with the finest wines that the area has to offer.
So which Rhône Valley wine of the numerous varieties to choose from should be paired with your sweet treats?

Let’s plump for the Beaumes-de-Venise, an iconic wine produced in the Vaucluse. It has actually nothing to do with Venice as the name might suggest but is actually a distortion of “de Venisse”, meaning “of the Comtat Venaissain” – the area where it is produced at the foot of the rocky Dentelles de Montmirail.

Formed in the Jurassic era, the terroir contains three types of soils, as well as deposits of Triassic rock that combined, produces excellent growing conditions for these unique wine

Although there is a red Beaumes-de-Venise, ranked as a cru since 2005, the village is most famous for its naturally sweet Muscat wine, available from your local Waitrose and all good off licenses! This wine, with its wonderful notes of lychee and rose, also goes particularly well with strong tasting cheeses such as Stilton.

Another AOC wine which is the perfect dessert accompaniment is the Rasteau, coming mostly from the commune of the same name in the Southern Rhône, also looking out to the Dentelles de Montmirail. These fortified wines were introduced in 1934 as a sweet vin doux naturel – red, white or rose, using principally the Grenache grape variety. 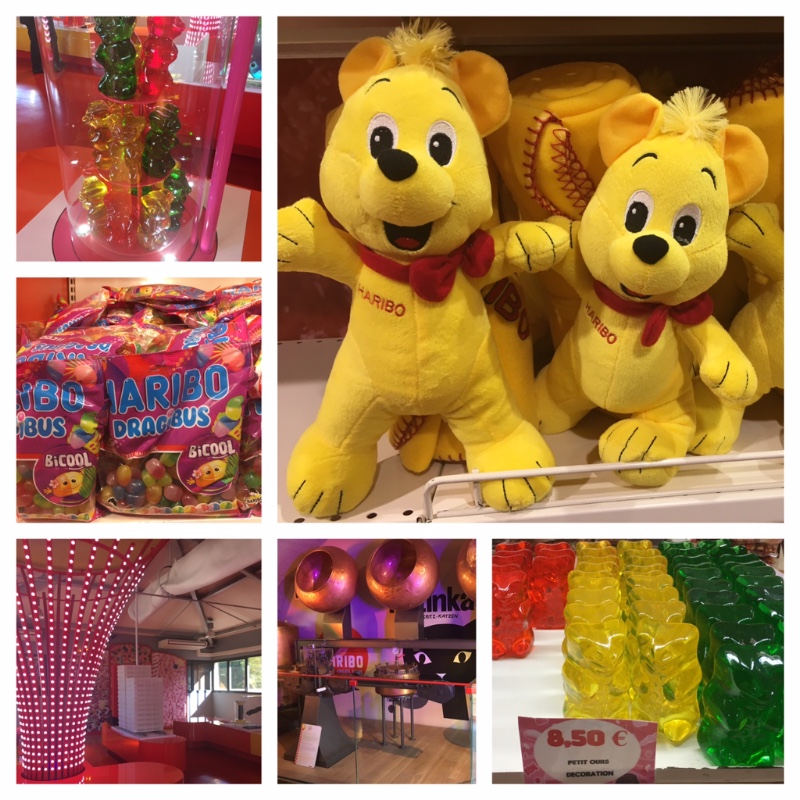 Kids and grown-ups love it so, the happy world of HARIBO: one knows Haribo it seems but few people know that there’s a museum – the aptly named Musée du Bonbon – owned and operated by Haribo based just outside Uzès, in the Southern France area of The Gard. It opened in 1995 and tells the story of the company’s foundation and growth as well as offering a large, well stocked sweet shop for devotees to carry home some sweet samples!!

So why Haribo? Well, the name is an acronym of the founder (Hans Riegel) and the city where the company was formed, Bonn in Germany. It’s the story of a husband and wife who, together, worked hard to turn a business based in a backyard laundry into a successful global brand. The famous fruit gum dancing bear appeared in 1922 and today, over 100 million golden bears are produced worldwide every day.

Here’s some other interesting “Did you knows”:

So when you are next in Southern France, head for Uzès and Haribo!  For entrance fees, it’s a mere €7 for an adult with under five’s welcomed free and 5-15 year olds priced at €5. There’s a large free carpark on site. 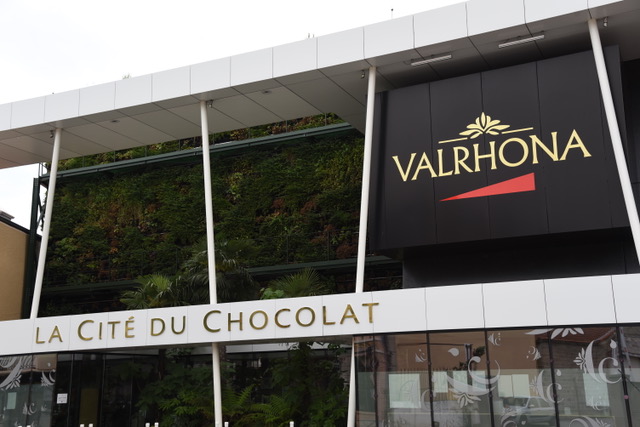 The chef’s favourite chocolate:  Ask any Michelin starred chef what chocolate brand they would use and most would undoubtedly say Valrhona. Even the august Chocolate Society rates Valrhona as simply the best saying, “The only company we know that focuses its attention on quality, without compromise, from the earth to the mouth is Valrhona. There are other fine chocolates being made but no other company succeeds in producing chocolate which is at the top of its class at every level from its access cooking range through to its sensational single plantation vintage chocolates.”

This French premium chocolate manufacturer, founded in 1922 by French pastry chef Albéric Guironnet, is located in the small town of Tain-l’Hermitage, a well-known wine-growing region in the Southern France area of the Drôme. Since 24th October 2013, it’s been possible to learn more about Valrhona by visiting their Cité du Chocolat – a multi-sensory visitor facility on the theme of the discovery of chocolate and based in their home town. Nibble on different chocolate buttons as you move through the inter-active exhibits which play to all your senses, particularly those of taste and touch, explaining how chocolate is made – from the bean to the button. You can time your visit to catch various culinary demonstrations using chocolate and can even have a chocolate fuelled lunch by visiting their café, Le Comptoir Porcelana! End your visit at the shop to stock up on every imaginable taste of fine chocolate. 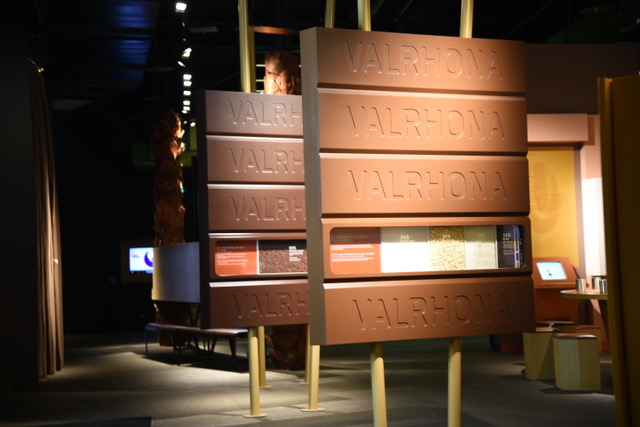 For more information, visit to www.vin-et-sens.com for further details.

Footnote: As this is wine country, why not mix a wine and chocolate tasting linking Hermitage wines with Valrhona chocolate? For self-guided tours of La Cité du Chocolat, prices range from €9 for adults before noon, €7.50 for 5 – 13 year olds and family tickets from €31. Book online for tours and more. 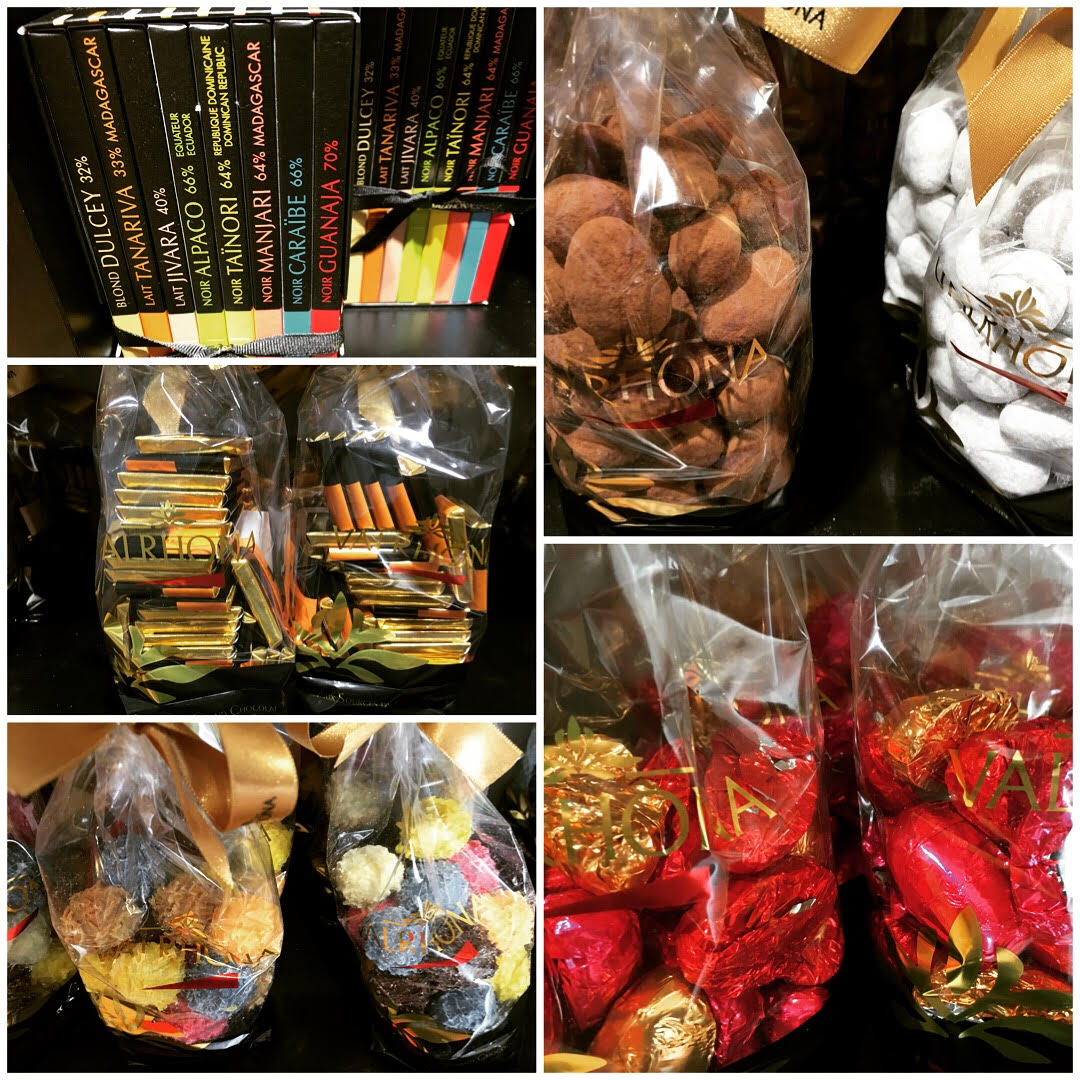 Montélimar in the Drôme is the home of nougat and where better to see the sweet in production than at the oldest producer – Arnaud Soubeyran. They have been making nougat since 1837, using the best of local ingredients and priding themselves on their craft to develop a full range of honey and almond flavours. 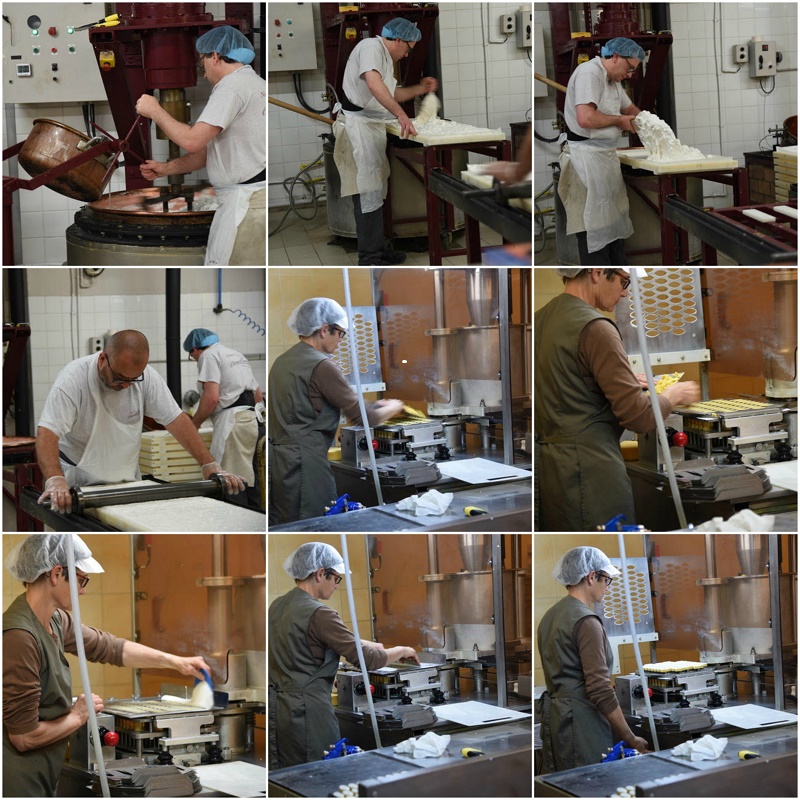 Their production has expanded to calisson, marshmallows, toffee, coated almonds and biscuits which you can watch being made in a tour of their premises and buy in their spacious – and very tempting – shop on site. 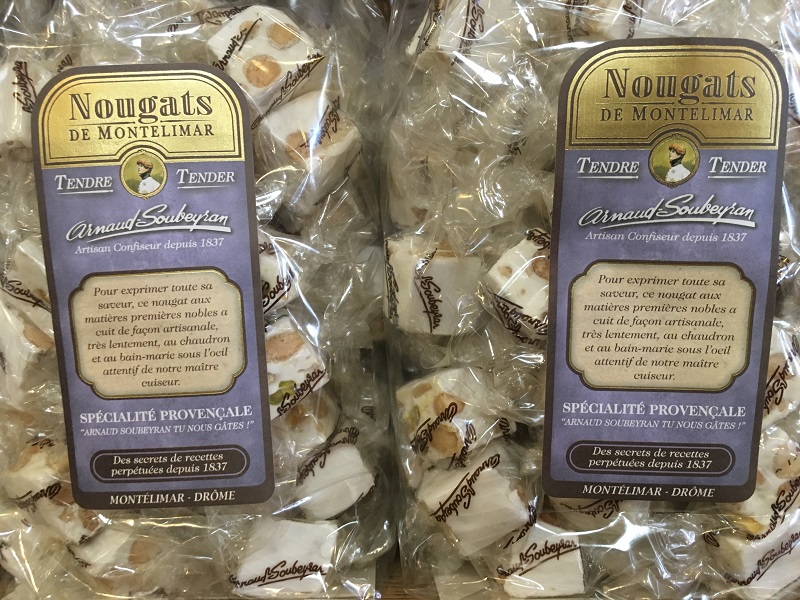 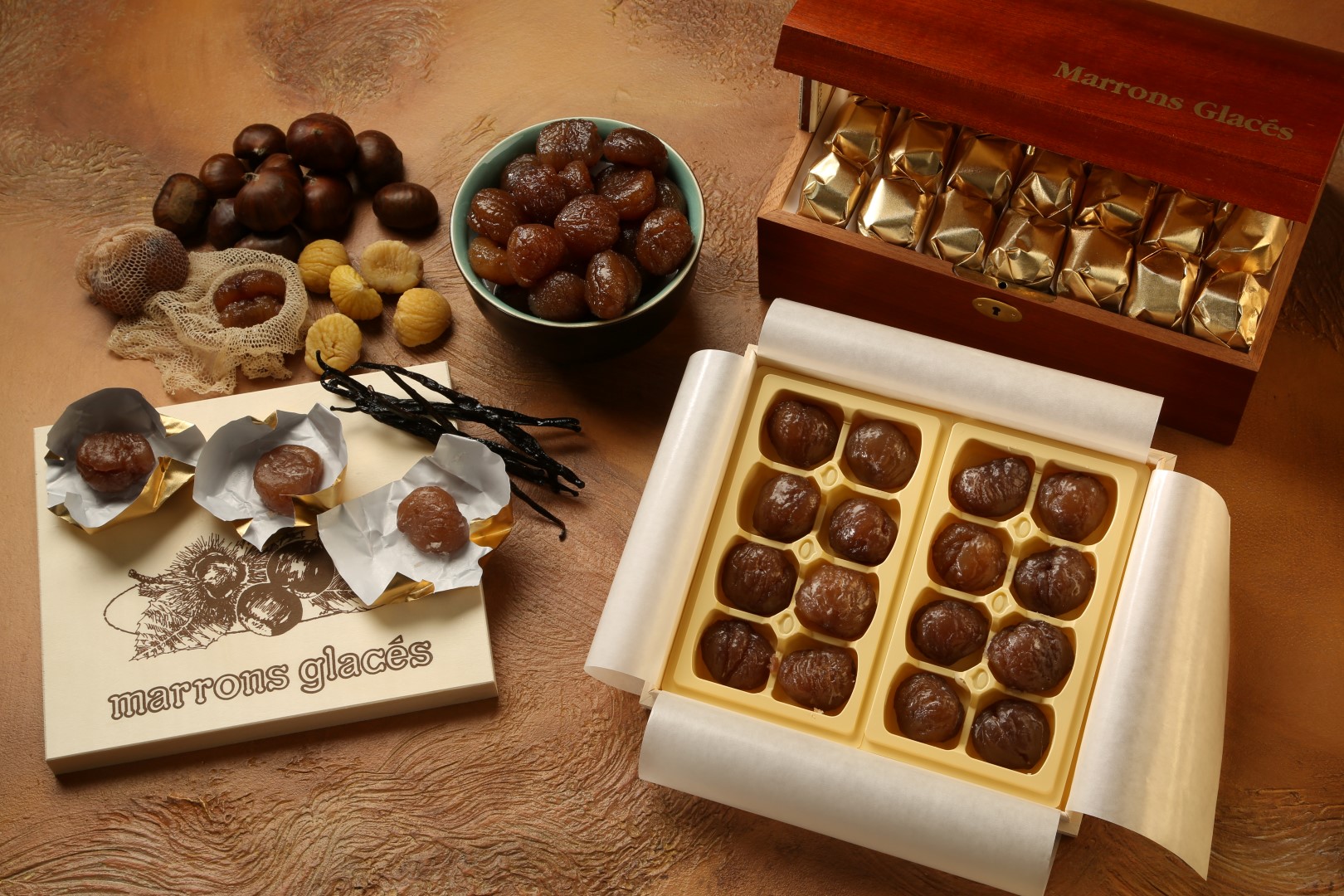 Where did the Marrons Glacés originate? The candied chestnut or marrons glacés first appeared in Northern Italy and Southern France as the crusaders returned to Europe with sugar in their luggage. The sweet probably first appeared with the glazing around the 15th century in Piedmont with both countries arguing that they came up with the addition of a glaze first.
Whatever the truth of the matter, there’s no denying that the first factory to mass produce marrons glacés was located in Privas in the Ardèche in 1882 devised by an engineer, Clément Faugier, in conjunction with a confectioner. Although packaged on an industrial scale, there are a number of steps that still take place manually from harvest to the finished product. Faugier also introduced the crème de marrons de l’Ardèche – a sweetened chestnut purée flavoured with vanilla just three years later. This actually re-used any marrons glacés broken in the factory process – very green!

Another equally august company – Marrons Imbert – started making marrons glacés at the turn of the century. Still in the same family’s hands, the founder’s great grand-daughter, Stéphanie, rules the roost today. Based in Aubenas, they are known for working with top of the range confectioners and chefs, as you can see from their rather enticing recipe section!  The renowned producer Sabaton, also based in Aubenas was founded over a century ago by a chef, Paul-Roche Sabaton, who wanted to diversify his restaurant business into retail. Today, they work with AOP Châtaigne d’Ardèche and are renowned for the quality of their marrons glacés together with their fruit jams and preserves.

Marrons glacés can be eaten on their own or used to make other desserts such as the Mont Blanc (a mousse-like dessert with cream), with ice cream, cakes, sauces or garnishes for other dishes. The Ardèche is famed for the quality of its chestnuts and is the largest producer in France. Granted AOC status in 2006, over 5,000 tons of chestnuts are produced each year. As well as desserts and sweets, there’s chestnut liqueur, chestnut soup and chestnut flour bread. 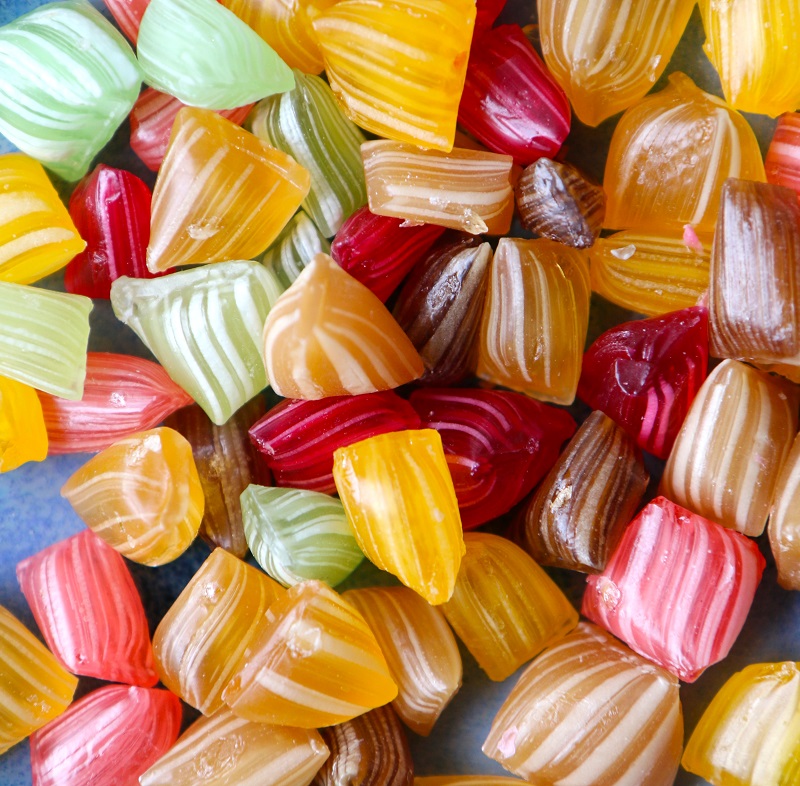 Berlingots from Carpentras, Vaucluse-Provence – The berlingots are brightly coloured boiled sweets, similar to a humbug, which come in all colours of the rainbow. What sets it apart are its white stripes, its tetrahedral shape and its differing flavours from peppermint to aniseed, lemon to strawberry.

Legend has it that the berlingot was created in the early 14th century in the papacy of Clement V, the first of the Avignon popes, to celebrate the dissolution of the Knights Templar. The name, so it is said, came from the Pope’s birth name – Bertrand de Got.

First used for medicinal purposes, it only became known as a sweet in 1844 when confectioner François Pascal Long added fruit syrup into the mix to make it more palatable. The process was then industrialised by Gustave Eysséric and the berlingots became world renowned. 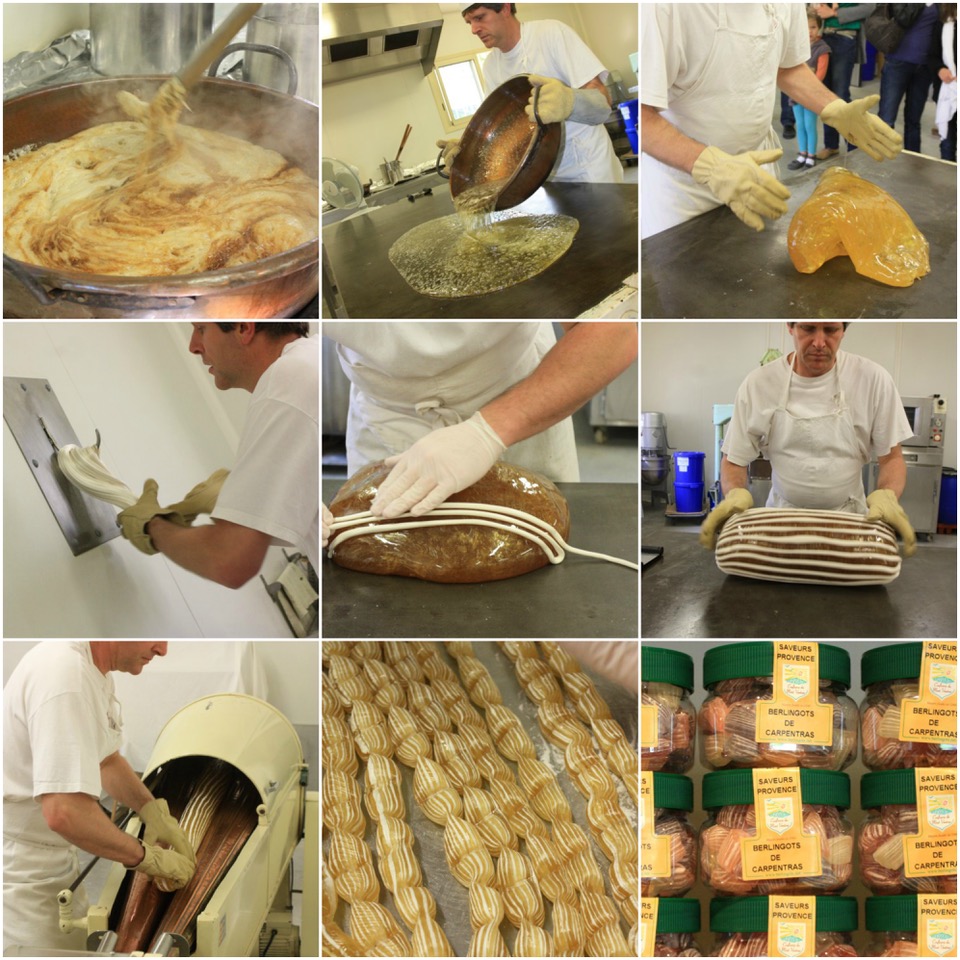 There are five stages in the production of the berlingot as you can see from the above image. It’s cooked, stretched, mixed, cut and laid on racks all before packaging. The colours of the berlingot normally indicate its taste – red for mint, green for anise, yellow for lemon etc. New flavours are always being introduced and include coffee, chocolate, melon, cherry, lavender, mandarin, apple and so forth.  It’s still made today in Carpentras by two companies – Thierry Vial (Confiserie du Mont-Ventoux) and Serge Clavel (Confiserie de Carpentras). 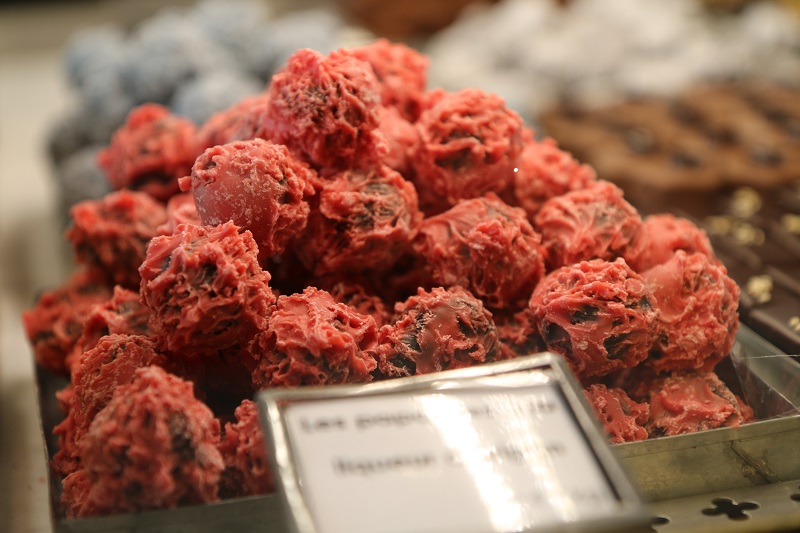 Papaline d’Avignon –The Papaline d’Avignon, created in 1960, is a small chocolate truffle in the shape of a thistle and filled with a liqueur – d’origan du Comtat. Its name was chosen to honour the Popes of Avignon and it was created by the Maîtres Pâtissiers of Vaucluse to give the region its own speciality.  It is, in effect, a kind of chocolate liqueur.

L’origan du Comtat is a beverage which dates back to 1835 and is produced by macerating alcohol with honey and 60 different plants from the region. It’s covered in two coats of chocolate, the outer applied by hand with a special brush to lend it its textured finish. Given its bright pink colouring, you certainly couldn’t miss it!