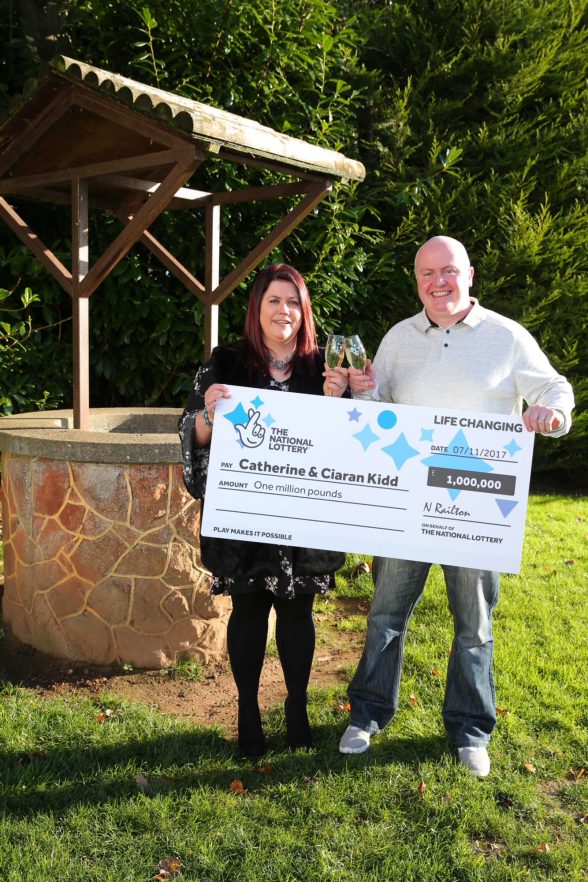 A NORTHERN Ireland couple have received the perfect Christmas present after scooping a stunning £1,000,000 in the EuroMillions UK Millionaire Maker draw on Tuesday 7 November.

Twelve years ago, Catherine and Ciaran Kidd celebrated their wedding at the Greenvale Hotel in Cookstown – and today they returned to their special venue to celebrate becoming Northern Ireland’s latest National Lottery millionaires.

The couple, from Draperstown, thought that they had already used up all of their luck when they won £20,000 in the Lotto Millionaire Raffle in November 2015, but two years on the lucky pair are now contemplating what to do with 50 times that amount.

“We really can’t believe this.  It still hasn’t sunk in,” said Catherine Kidd (38), who works for a personal youth development programme that helps 16-25 year-olds find employment.

“We were lucky enough to win £20,000 in the Lotto Millionaire Raffle almost two years ago to the day and that made such a big difference to our lives back then, paying off our car and taking us on holiday.  Now we’ve won a million pounds and we really haven’t a clue what we’re going to do with it just yet,” she added.

Catherine plays both the EuroMillions and Lotto every week online and described how she and Ciaran found out that they had won.

“The great thing about playing online is that you always receive an email to tell you if you’ve won anything so I was in work on the Wednesday after the draw when the email came through,” explained Catherine.

“I assumed that we’d won a free lucky dip as that is the most regular outcome but I wasn’t able to check on my computer at work so I phoned Ciaran and asked him to check at home – as I couldn’t settle with the suspense until I found out.

“After a few minutes, he called me back and said I must have given him the wrong details as the system was showing that we’d won a million pounds on the EuroMillions Millionaire Maker.  He thought that I was winding him up, and I thought that he was winding me up, but then he sent a screen shot to my phone and it all went a bit crazy after that.

“I made my excuses at work to nip outside, phoned the National Lottery line provided and a couple of calls later, it was verified that we had won a million pounds.  I thought my heart was going to burst out of my chest as I sat in work for the rest of the day – trying to control my emotions and asking myself if this was really happening.

“When I got home, Ciaran and I just stared at each other as if to say ‘can you believe this is happening’ and gave each other a big hug.  It was, and still is, totally surreal.”

Catherine and Ciaran have four young children between the ages of two and 10 and are now looking forward to an extra special Christmas together as a family.

“To be honest, we have all our Christmas presents already bought but I’m sure there will be something extra special in the kids’ stockings this year,” said Catherine.

“We have no big plans on what to spend the money on at this stage but already there’s a tremendous sense of freedom, a lifting of pressure and the wonderful feeling that we’ll be able to spend more time together as a family.

“And coming originally from Rochdale, I have family in England that we can now go and visit any time we want without having to worry about whether we can afford the flights or even the time off work.

“Obviously there are lots of things we might consider buying like a new car or a nice family holiday, but really the freedom to spend more quality time together as a family is priceless and we are so lucky and so grateful that The National Lottery has made this possible for us.”

Husband Ciaran (40), a machinist at Moyola Precision Engineering, said, “We are still pinching ourselves to make sure this is true.  We’re glad to finally get it out in the open because we’ve been dying to tell people since we won and it’s been so hard to keep it a secret.

“We’re very normal down to earth people who have been lucky to experience something that is far from normal – and we feel very privileged to be in this position.

“Nobody ever thinks this will happen to them but we are living proof that it really can happen to anyone,” added Ciaran.

The National Lottery has been changing the lives of winners like Catherine and Ciaran as well as communities across the UK with players raising, on average, over £30 million for National Lottery-funded projects every week.

In Northern Ireland alone there has been more than £1 billion awarded in National Lottery grants to more than 20,000 individuals, organisations and projects across the arts, sports, heritage, health, education, environment, charity and voluntary sectors.