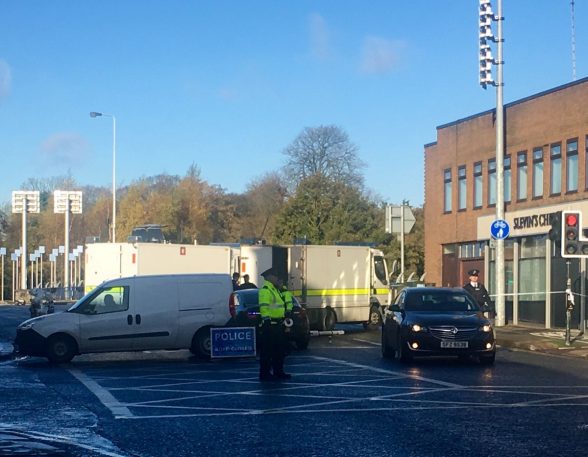 POLICE say a viable pipe bomb has been defused during a Remembrance Sunday security alert.

The device was found at Drumragh Avenue in Omagh.

The security has now ended and the bomb has now been taken away for further forensic examination.

The sickening attempt to take lives comes 30 years after the IRA’s Poppy Day Massacre in Enniskillen.

PSNI Chief Constable George Hamilton has slammed those behind the bomb alert.

He said: “This small but potentially dangerous device was left to cause the maximum amount of disruption to the Remembrance Sunday commemorations.

“This is the action of a small and callous group of violent people who have nothing to offer our communities other than fear and intimidation.

“Whilst our investigation into the incident is at a very early stage one strong line of enquiry is that violent dissident republicans are responsible.

“Their actions today have demonstrated the disregard and disrespect they have for this community, which has already suffered so much pain and hurt at the hands of terrorists.

“It was a sickening and appalling act on a day which should bring people together to remember the sacrifice made by people from all our communities.”

Police enquiries into the incident are now underway and anyone with any information is asked to contact police in Omagh on 101 quoting reference number 100 12/11/17.