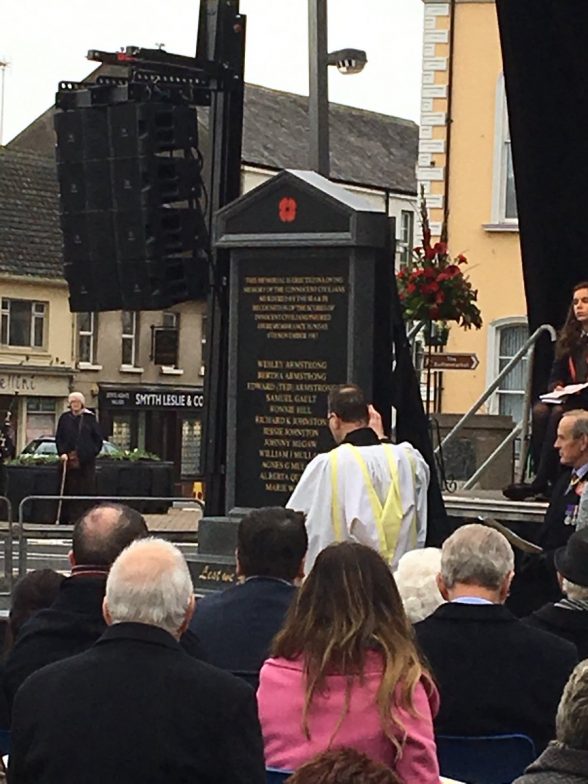 A POIGNANT memorial to 12 people killed in an horrific no warning IRA bomb in Enniskillen has been unveiled in an event marking 30 years since the attack.

The bomb exploded at the town’s cenotaph on November 8, 1987, during a Remembrance Sunday service.

Eleven people were killed and more than 60 people injured in the bombing.

A twelfth victim, Ronnie Hill, slipped into a coma two days after the explosion and died 13 years later.

DUP leader Arlene Foster, PSNI Chief Constable George Hamilton and NI Secretary James Brokenshire were among those who attended Wednesday’s ceremony at the cenotaph, along with families and relatives of those killed and injured.

The Queen sent a message to those gathered at the ceremony to say that the memorial was a poignant reminder of a terrible event.

After a two-minute silence, the names of the dead were read and 12 bells tolled.

Family members and dignitaries laid wreaths at the new memorial. 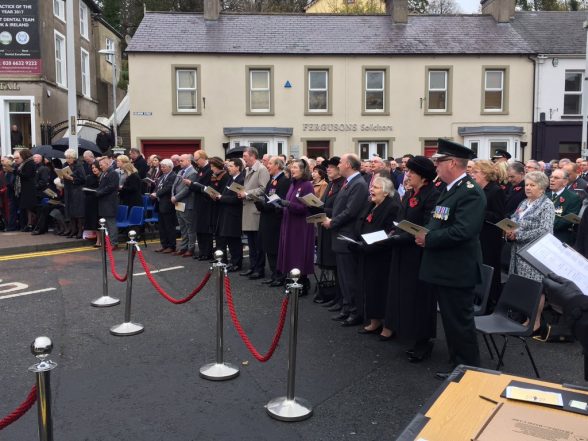 The Ballyreagh Silver Band, who played at the 1987 Remembrance Sunday ceremony, provided music for the ceremony.

Remembrance Sunday 1987 was a day that the people of Enniskillen would never forget.

They bear the scars.

The bomb blew out walls, showering the area with debris and burying some people in several feet of rubble.

Now 30 years  on, families will gather at the new Presbyterian Church hall to remember the horror that brought them together and to reflect on how times have changed for Northern Ireland.

Shortly after 10 am, they made their way just a few yards up the road to the area around the war memorial, remembering those who made that fateful journey in 1987.

One of those who set the tone after the bombing was Gordon Wilson, whose daughter Marie was killed and who was himself injured in the attack.

He repeated his 20-year-old daughter’s final words to him as they both lay in the rubble of the bombing. 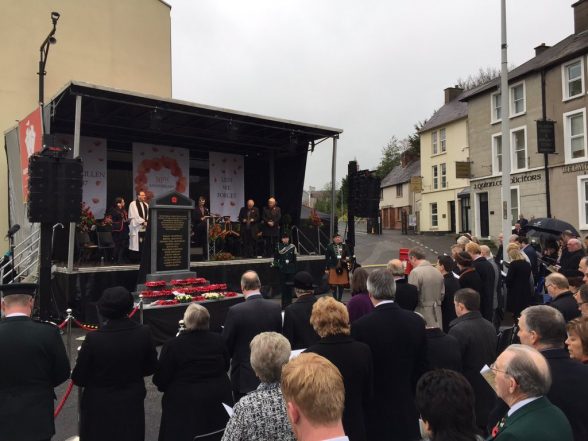 “Daddy, I love you very much,” she said.

Mr Wilson said: “I bear no ill will. Dirty sort of talk is not going to bring her back to life. She was a great wee lassie.”

A group called Enniskillen Together was set up to further the cause of reconciliation in the area.

The IRA lost support worldwide after the bombing.

On Remembrance Day 1997, the leader of the IRA’s political wing, Sinn Féin’s Gerry Adams, formally apologised for the bombing.

But the weasel words were little comfort to those that perished in the horrific attack, those maimed and those left forever bereaved.

The bomb exploded at 10.45 am. There was no warning given by the cowardly IRA who had transported the bomb across the border from Co Leitrim.

Those who died in the attack were all Protestant and included three married couple, a reserve police officer and several pensioners.

Following the attack, the Queen sent her “heartfelt sympathy” to the people of Enniskillen and the then Prime Minister, Margaret Thatcher, called it “utterly barbaric” and “a blot on mankind”.

There were 10 arrests in connection with the bombing, but no-one has ever been convicted of the attack.

Up to 30 IRA terrorists were involved on both sides of the border and police believe the attack was sanctioned by the IRA’s Northern Command leadership.