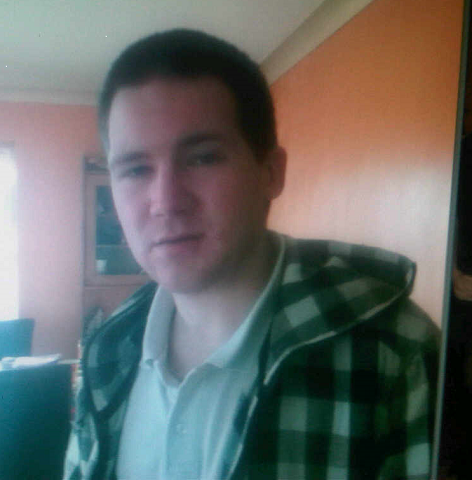 THE PSNI has issued a fresh appeal for information in relation to missing man Peter Quigley on the fourth anniversary of his disappearance.

The last known place the 35-year-old is believed to have been seen was Moira train station in County Down on 26th September 2013 at approximately 11am.

He is believed to have been wearing a dark hooded top, a blue coloured sweatshirt, three quarter length grey jeans, black shoes/trainers and a dark socks.

Peter, from the border town of Newry, was reported missing on Thursday, 7th November.

“Peter’s last address was in the Newry area where he lived for 10 years with family.

“However, he never lost his London accent where he was born and where he lived for a number of years in the Heathrow area.

“Peter’s family are desperate for information about their son’s whereabouts and his welfare and there isn’t a day goes by they don’t think of him, and worry if he is safe and well.

“We have followed more than 40 different lines of enquiry, in addition to searches in the area of Moira Train Station, CCTV trawls and further enquiries across the UK and Ireland with assistance from An Garda Síochána and the Metropolitan Police Service.

“Despite extensive searches in the four years that have passed – which have also involved Peter’s loved ones and friends – we have been unable to locate him, and that is where we need your help. 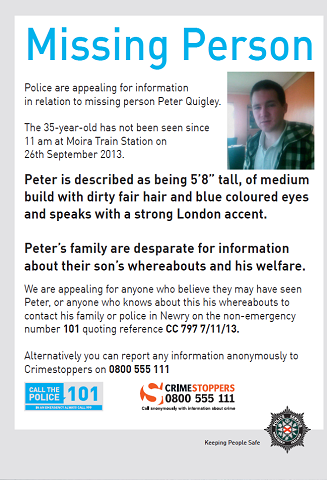 “Do you recognise Peter?

“Were you at Moira Train Station on September 26th 2013? If you were, please try and jog your memory back to that day – do you remember seeing Peter?

“Do you think you’ve seen anyone matching Peter’s description in the intervening years?

“No matter how small, or how insignificant you think the information you have is, it could help our investigation.

“Peter, if you hear or see this appeal please, get in touch and let your family know that you’re okay.

“I am appealing to anyone who believes they may have seen Peter, or anyone who knows anything about his whereabouts, to contact his family or police in Newry on the non-emergency number, 101 quoting reference CCS 797 07/11/13.”