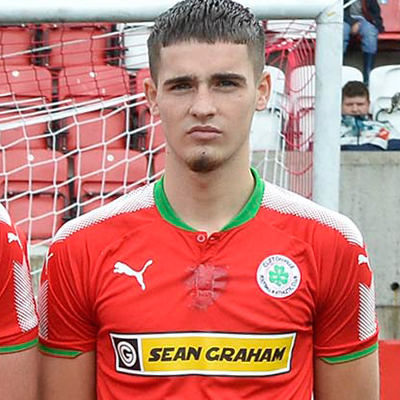 CLIFTONVILLE FC are keeping tight lipped over the future involvement of Jay Donnelly in the team’s matches on the pitch.

But the Reds are refusing to comment on whether he will be suspended until his case is finally concluded in the courts.

The 22-year-old, from Ardilea Drive, in the Ardoyne district of north Belfast, did not appear for the short hearing in court 9.

The case was listed under his proper name of John Donnelly

According to the charge sheet, the first count reads that “on June 28, 2016, he took an indecent photograph of a child’’.

No plea was entered on Donnelly’s behalf to the court.

During the brief hearing, a lawyer for Donnelly said he was asking for the prosecution to “particularise” the dates the offences are alleged to have taken place.

District Judge Amanda Henderson set a date of Wednesday, November 22 for a second hearing to be held into Donnelly’s case.

Cliftonville will host Ballinamallard United this Saturday, November 11, at Solitude in the Irish League.

At the weekend, the club, chaired by Gerard Lawlor, said it was unaware Donnelly had been formally charged with the two offences.

He played in last Saturday’s 3-0 win of Carrick at Solitude.

In a statement, the Irish League side said at the weekend: “We have only become aware of the developments in this case.

Since then, no statement has been issued through the north Belfast club’s website about Donnelly’s future with the Reds ahead of this weekend’s home fixture.